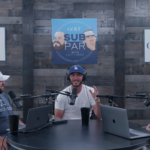 Subpar's Colt Knost and Drew Stoltz are joined by PGA Tour winner Max Homa, who discusses how being paired with Rory McIlroy brought him confidence.

A few years ago, Max Homa was a professional golfer struggling to find his rhythm. In the span of five seasons between 2013-18, Homa got on the PGA Tour twice, lost his Tour card twice and with each demotion lost all his confidence. For most of his early 20s, Homa lived the “other side” of being a professional golfer — struggle, sacrifice, and little pay.

In 2019, that all changed. Homa had his breakthrough win at the Wells Fargo, secured a winner’s exemption and earned an invite to the Masters. With the win, his social media presence exploded (he’s now golf Twitter famous) and his popularity ballooned overnight.

Homa openly admits he doesn’t have the same raw talent as some of the sport’s best players. But as he explained to Colt Knost and Drew Stoltz on GOLF’s Subpar, what he lacks in skill, he makes up for in mentality.

“What I used to hang my hat on when I was in college and junior golf was I always had that chip,” Homa said. “If it’s just me versus you, I’m taking me. I put a lot of pride in being a dog all the time.”

Homa’s competitive edge eventually carried over against some of golf’s top players, including Rory McIlroy in Charlotte. The two were paired together for the third round of the 2019 Wells Fargo Championship. McIlroy had the slight edge (68 to 70) but Homa proved to himself he could hang. (Homa was in a three-way tie for the lead after 54 holes, and McIlroy was two back and teed off two pairings ahead of Homa, who won by closing with a 67, six better than McIlroy.)

“I watched, it’s hard not to,” Homa laughed. “His first two drives he hit that day were the dumbest things I’ve ever seen. I watched, but I knew what I was getting into, having seen so much of him.”

What carried Homa through that round, and others like it, was a simple mantra.

“I just kept telling myself, I’m going to make these people know who I am,” he said. “It was a good thing, it sort of brought out a chip on my shoulder.”

Whether it’s the chip on his shoulder or his Twitter swing roasts, Homa’s name is a prominent one in the golf space. In his eyes, everything boils down to passion.

You can watch the rest of Homa’s Subpar interview, including a deep dive into his most nerve-wracking celebrity swing roast and the piece of advice Charley Hoffman gave him that carried him through his career, in the video below.