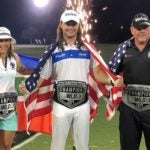 The World Long Drive Association, the sport’s largest and longest-running circuit, is on the market, GOLF.com has learned.

A spokesperson for Golf Channel, which owns and operates the WLDA, told GOLF.com that the network is looking to unload the tour due to a range of pandemic-related factors, including dwindling sponsorship dollars, safety concerns and travel restrictions for what is “a truly global sport with hitters from around the world.”

“Given the current environment and challenges being presented by Covid-19,” the spokesperson said, Golf Channel is also “looking to focus on its core business of media.”

The news comes in the midst of a 2020 WLDA season that was put on hold before it got underway. The first five of the year’s six scheduled events, starting in April, were all cancelled, leaving only the season-ending World Long Drive Championship on the calendar for September.

Late last month, though, the WLDA sent a letter to long drive competitors saying that the season finale had been “suspended, pending the ability to identify a strategic partner” to run the event.

In that same letter, Golf Channel said that it was searching for a “long-term partner to manage the sport moving forward.”

The WLDA has been part of Golf Channel’s portfolio since 2015, when the network purchased what was then the Long Drivers of America. The acquisition was part of Golf Channel’s efforts to expand its live programming throughout the week, beyond its traditional Thursday through Sunday professional golf coverage.

At the time, the WLDA had just one televised event per year. By 2019, Golf Channel had increased that number to six. That same year, the WLDA received nearly 120 hours of television coverage in the United States and was beamed onto screens in 60 countries with a total viewership of 130 million people. Entering 2020, the tour was coming of its two most-viewed seasons, according to data released by The Nielsen Company.

Whether that translated into profits for Golf Channel is another matter. The network spokesperson declined to discuss financial details.

For the competitors themselves, it’s no secret that long drive is a comparatively small-money sport. Only a handful of long drivers earn a full-time living at it, with even top performers making less in a year than many Tour pros collect with a middle-of-the-pack finish in a single event. Most long-drivers supplement their incomes with corporate outings and clinics, among other gigs.

But relatively small purses have not stopped participation from swelling. Originally contested as a novelty at the 1976 PGA Championship, long drive has evolved over the years from a niche showcase into a sport staged on six continents, in competitions run by multiple circuits. Last year’s World Long Drive Championship featured a field of 96 men and 20 women, drawn from dozens of qualifiers around the world.

Jason Zuback, a five-time World Long Drive champion (and one-time winner of the senior division) said that while Golf Channel’s decision was “cause for some concern” in the short run, it did not to dampen the passion behind long drive, or the sport’s long-term potential.

“Over the years, we’ve seen interest in the sport grow, with more media attention, more fans, more competitors,” Zuback said. “The fact is, you and I could decide to put a grid up next month in Mesquite (Nevada), and a great field would show up, no matter what kind of prize money we were offering.”

A television deal, Zuback acknowledged, is an invaluable asset for any sport, and in that regard, long drive’s loss may only be temporary.

Despite its decision to sell, the Golf Channel spokesperson said, the network is still interested in covering the sport, adding, “Golf Channel believes in the property, and is looking to remain the future media/broadcast partner of World Long Drive.”

Golf Channel announced in February that it is moving from its Orlando headquarters to Stamford, Conn.

“Geographic consolidation is a growing and sensible trend across the media industry, and as our business continues to evolve, we’ll continue to look for ways to operate as effectively as possible to deliver world-class coverage to our loyal audiences,” the network said in a statement.