At one JW Marriott San Antonio Hill Country Resort & Spa eatery, it’s all about the chicken and waffles 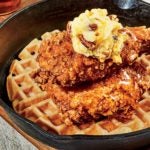 Welcome to Clubhouse Eats and Drinks, where we’ll introduce you to our favorite food and drink at some of the best golf courses, golf resorts and golfy locations around. Cheers!

While food historians may not all agree, the captivating combination of fried chicken and waffles quite likely originated at Wells Supper Club in 1930s Harlem. Legend has it jazz musicians rolling in after work during the wee hours craved something that offered part dinner, part breakfast. A comfort classic was born.

Over the decades, the dish has taken on a life of its own (as anyone who has been to Roscoe’s House of Chicken and Waffles in Los Angeles will tell you).

According to executive chef Brian Sundeen, the dish’s deliciousness starts with the chicken, which is marinated overnight in a mixture of buttermilk, garlic and hot pepper to achieve maximum tenderness and flavor infusion. Then it’s coated with a blend of 18 spices, fried up crispy and lovingly stacked atop a from-scratch Belgian waffle. The combo is finished with house-made, maple-pecan butter and bourbon maple syrup. The adventurous among you may even opt for Cibolo Moon’s candied jalapeño garnish. That should jazz things up.

Mash together the butter and maple syrup in a medium bowl until well combined and smooth. … Fold in the chopped pecans until evenly distributed. … Cover with plastic wrap directly on the surface and refrigerate until serving.