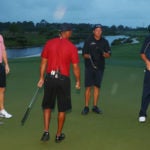 What was it like to be on the ground for golf's strange new Florida Swing?

When live professional golf made its return at Seminole and Medalist a couple weeks ago, there were no outside media members allowed on the grounds. That was a perfectly reasonable move by the organizing bodies in charge, who were looking to minimize interpersonal conflict and risk of coronavirus spread.

But our Michael Bamberger has a way of showing up places, and he was eager to experience this strange new Florida Swing in person. He set off from his Pennsylvania home by car and completed the trek to Florida in the days leading up to golf’s first event, TaylorMade Driving Relief. From there, Bamberger reported on the goings-on about Seminole and provided full context on the action to come. While he wasn’t permitted on the grounds during the event, he found a way to watch the action in person anyway.

Bamberger stuck around South Florida for the week that followed. He hung out with Greg Norman to better understand the Shark’s backstory and his relationship with Medalist, which would take center stage that Sunday in cable TV’s biggest golf event ever. Then he took in The Match II from the clubhouse of the par-3 course directly adjacent to Medalist.

Over the course of his 10-day stint, Bamberger got back to his forte: on-the-ground reporting. This week he joined the Drop Zone podcast to reveal what he saw and what he learned from behind the scenes of golf’s return to our television screens. For inside information on Seminole to the state of Tiger Woods’ game to one-on-one chats with Norman to the lessons of The Match II and more, check out the embedded pod below or subscribe to the Drop Zone at one of the following links.