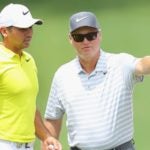 Jason Day and Colin Swatton worked together since Day was 12 years old.

One of the longest player-coach partnerships on the PGA Tour has ended. PGATour.com reported Wednesday that Jason Day and swing coach Colin Swatton have parted ways.

“It’s been a long and successful road working with Col,” Day said. “I have just decided I want to make a change and work on my own as it pertains to my golf swing. Col has been way more than just a caddie and coach to me. I am forever grateful for all he has done for my golf and his continued friendship.”

The 32-year-old Day has been with Swatton since he was 12. Day attended a boarding school in Australia shortly after his father passed away, and Swatton took him under his wing.

Day has won 12 times on Tour, including the 2015 PGA Championship and 2016 Players. He also rose to No. 1 in the world in 2015 and totaled 51 weeks at that spot, which he last held in early 2017. Swatton was Day’s caddie for 11 years, a relationship they ended in 2017 after 10 wins on Tour together. Swatton remained Day’s swing coach until recently.

Day’s last victory was at the 2018 Wells Fargo Championship. He’s now ranked 43rd in the world.

Day tees off for the first round of the WGC-FedEx St. Jude Invitational at 1:30 p.m. ET on Thursday alongside Matthew Wolff and Graeme McDowell.