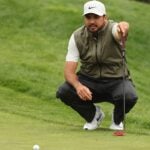 Two rounds in, Jason Day has found some magic in an old putter.

Jason Day has a familiar putter in hand this week. He seems to have found some of its old magic, too.

Day leads the Wells Fargo Championship thanks to a 63-67 start that has him 10 under at the halfway mark, three shots clear of second place. He’s doing so with his trusty red Spider in the bag — a TaylorMade Spider Limited Red, to be precise — that he’s used in wins as far back as the 2016 Players Championship.

At that point in his career, Day was performing something resembling actual wizardry on the greens. Just how good was he? In the 2015-16 PGA Tour season, Day gained 1.13 strokes on the greens per round. For context, Jordan Spieth was second-best at 0.758. For more context, nobody else — not a single golfer — has cracked that 1.0 mark for an entire season since the Tour started keeping strokes gained stats in 2004. Day’s putting season was so good it’s a borderline statistical anomaly.

And while it was a particularly spicy year for Day on the greens, but the fact that he led the Tour in putting wasn’t a shock. He’d been sixth in the same stat the year before (gaining 0.586 strokes per round) and finished second in 2017-18 (0.77). Day’s putter was his superpower.

It’s important to note that it wasn’t really his putter that was letting him down. After the 2016 season, Day went from one of the best irons players in the game to below average. He was suddenly erratic from the fairway; some weeks he’d be hot with his irons but on aggregate, that’s where he was losing the bulk of his strokes. Unlike in previous years, when his irons weren’t sharp, his putter wasn’t automatically there to bail him out. Last season, as Day slipped outside the top 100 in the world, he suffered his worst putting year on record, too, finishing 95th on Tour.

“I remember a year and a half ago I put two tees between either side of my putter and I couldn’t stroke it between the two tees,” he said post-round Friday. “I was more concerned about the putting more so than the actual swing itself.”

That was a troubling sensation for a guy who, in previous years, had said he spent two-plus hours every day just working on his putting. But the realities of golf were converging with the realities of life. Day’s family was growing (he and his wife Ellie had their fourth child last year) and his mother was sick. He was in a constant battle with a balky back. Things were more complex than they’d ever been. Golf was more difficult.

Even in his down stretches, though, Day showed flashes of his best stuff. He led the 2021 Travelers at its halfway mark. He played in the final group at this year’s Farmers, ultimately finishing T3. His putter got hot that week, too, and swing changes he’s been working on with Chris Como were beginning to take. His best has always been good enough to win, after all. He seemed on the brink.

But in early March, Day’s mother Dening died after a five-year battle with lung cancer.

“Unfortunately, I kind of hit a bit of a — I lost a little bit of momentum with my mum passing away and all that stuff,” Day said Friday. It’s impossible to properly address personal loss in the context of athletic performance. But there’s also no separating the two. Day missed his next three cuts.

He gained some confidence from contending at the Zurich Classic, a two-man team event. But leading at this week’s halfway point seems particularly satisfying. “Finally finding my footing again is nice,” he said simply.

Friday brought a particularly brutal test to the pros at TPC Potomac, with chilly temperatures and relentless rain beating down the entire round. Day was up to the challenge.

Day’s already found his way there; now it’s a matter of staying for the weekend. He’s leading the field in strokes gained approaching the green. He’s 10th in strokes gained putting. The new swing is working. So is the old putter.

“I’m finding a lot of confidence in my swing,” he said. “Every now and then it kind of falls back to some of the old stuff, but the big thing for me is just to not kind of panic and just take a step back and go through my shots and try and trust it the best I can.”