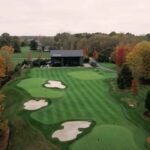 In the debut episode of Home Course, a new YouTube series from PGA Memes founder Travis Miller, Day shows off his spread, and, boy, is there a lot to show. With the 2015 PGA champion serving as tour guide, he first welcomes viewers inside the guesthouse that backs up to his yard and resembles a superhero’s hideout. Inside the facility is a full bar, a couple of bedrooms, a trophy case — the Wanamaker front and center, of course — plus a sizable TV screen on which Day says he watches CNBC in the morning.

But that’s only the beginning of the fun. Day’s golf toys are enviable, beginning with a simulator that sits next to robotic green that can be adjusted to various slopes and grades. Day says when the green was installed, it was only the third of its kind in the United States.

Outside the compound’s barn doors is the crown jewel: a practice area featuring three different greens (one for iron shots, one for putting and one for short game), plus a 160-yard par-3. Day keeps a superintendent in-house to maintain the facility, which has three bunkers, each with a different kind of sand: one to mimic the sand at Muirfield Village, another with Oakmont-style sand and a third — a pot bunker — filled with the kind of sand you’ll find on links courses in the U.K. Back near the par-3 tee box, Day even has his own Rolex clock.

“That’s exactly what it is, how I started this memes stuff was just that I love memes and I wanted to find something that related to the golf community humor and show some fun with these guys,” Miller said on this week’s episode of Subpar. “But as I built this out, I wanted to create some more content with the players and find more ways I can humanize them and help them build their personal brands and whatnot.”

“With this show directly, it’s like, man these guys have so many great homes and great golf complexes at their properties. They’ve got awesome cars and toys that are crazy,” Miller said. “Not everybody wants to be super showy, but at the same time, they don’t have the opportunity like some of these other guys where you only see them getting interviewed after the round. You know, a lot of em are just awesome guys with really great families and awesome lives, and this was just an opportunity to create some cool content in the golf space and allow them to step out and show the stuff they’ve earned from their careers.”