Rory McIlroy and Rickie Fowler are each chasing something elusive 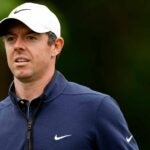 Rory McIlroy doesn’t need much of an assist; he’s among the best golfers on the PGA Tour at digging into his own psyche. But on Thursday, after he polished off an opening round of three-under 67 at the Wells Fargo Championship, McIlroy was asked a question about his playing partner, too. His answer reminded us about hot streaks and the fickle nature of professional golf.

The last time that playing partner, Francesco Molinari, played a tournament at this week’s host course, TPC Potomac, was the 2018 Quicken Loans. He won the tournament by eight. Molinari was on top of the golfing world that summer, with that win coming in the midst of a ridiculous 1-2-T25-1-T2-1 worldwide stretch that culminated in a victory at the Open Championship. He went 5-0-0 at the Ryder Cup that fall, won the Arnold Palmer Invitational the following spring and led the 2019 Masters on the back nine on Sunday.

Things got instantly tougher after that; since that Masters, Molinari disappeared into golf’s wilderness. He’s logged just four top-10s, hasn’t seriously contended and has fallen from the top 10 all the way to No. 203 in the world. On Thursday, McIlroy was asked post-round about Molinari’s hot stretch — and his return to reality.

“Is there something about how fleeting that is, how hard to hold that feeling?” a reporter asked.

“Yeah, there’s I think there’s times as a golfer where everything just sort of matches up. Physically you’re feeling really good, mentally you’re in a good space, your confidence is high and yeah, when you go through periods like that, you have to take advantage of them,” McIlroy said. “There’s always things in golf that are working against you. You can feel like you’re right on your game but you’re uncomfortable to left pins. But every so often there’s times when everything clicks.”

He was referencing Molinari’s glorious 2018, when he found prime form and took full advantage. But McIlroy reminded us that when everything does click, the very best pros can get red-hot for a relatively short period of time.

One pro McIlroy left off that list is, of course, himself. Between 2011 and 2014 he won four majors, a World Golf Championship and assorted PGA and European Tour events. That’s a longer and more fruitful run than just about any of his peers. But like Molinari, and like Spieth, and like Day, and like others, the curse of a streak that hot is that now, inevitably, the golfer McIlroy gets compared to most often is that peak version of himself.

His comments reminded us of a common struggle for golfers, whose lengthy careers allow for nostalgia even as reality sets in. But Thursday was a throwback some half-decade, with Jason Day leading the way at seven-under 63 and Rickie Fowler (four-under 66) not far behind. McIlroy’s post-peak golf has still been top-tier on Tour. That hasn’t been the case for either Day, who has fallen to No. 127 in the world, nor Fowler, who’s No. 146.

“The thing that’s different between now and when I was No. 1 in the world, even though the technique might not have been as crisp as it is right now, I had all the confidence in the world, especially on the greens,” he said. “So that’s always the goal.”

Fowler faced a similar line of questioning. But he said the key, in his mind, is to look forward rather than back.

“It’s not even getting back there, I’m trying to be better than I ever was,” he said. “No one’s ever trying to go through changes to just get back to what was there or to continue to stay the same. Everyone’s trying to get better.”

Unfortunately, Fowler said, progress hasn’t been linear and the process has taken longer than he hoped. He, like Day, used to lean on his putting. That hasn’t proven as reliable of late.

“I’ve putted poorly, very poorly. So when I have had some decent ball-striking days, I haven’t really been able to capitalize, and then if I’m a little off and not making anything, it looks a lot worse than it is,” he said.

As for McIlroy? He was impressed with Molinari’s grit, hanging in after a double bogey to post a round of one-under 69. But he didn’t have long to ruminate on another player’s game — he was off to get some treatment.

“Just little niggles and aches and pains,” he said. “I’m a year older now, so just have to make sure I take care of some things.”

McIlroy turned 33 on Wednesday. Though he’s won just about everything else, he hasn’t won a major championship since the PGA in 2014. In his pre-tournament press conference, he reminisced on his play at the 2011 U.S. Open, just down the street at Congressional, where he won by eight.

“Eleven years ago does seem like a long time ago. It is a distant memory,” he said. “I think I’ve watched it back so many times, I don’t really remember the experience of it. I remember more just from watching on a laptop or a TV screen.”

In other words, the version of McIlroy we’re holding up for comparison is a version he can hardly remember himself. Still, he can’t help but look back at it, like we do, and chase that version of himself, Peak Rory, wondering if it’s possible he could still tap into that same magic.

“Yeah, I still to this day think it’s the best week of golf I’ve ever played in my life,” he added. “The ball was on a string that week and you wish you could bottle that every single week that you play. Unfortunately, that’s not the case. But I think that’s still the benchmark of how I can play.”

The benchmark of how I can play. That’s a standard he, like every other golfer, will keep on chasing.