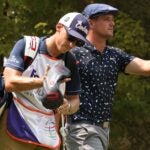 Bryson DeChambeau and his caddie, Brian Zeigler, during the final round of the WGC-FedEx St. Jude Invitational.

Hideki Matsuyama, as stoic as they come, was laughing. He and his caddie were being carted toward the first hole of a three-player playoff at the World Golf Championships-St. Jude Invitational, and they appeared to be enjoying the CBS drone that was tracking them from above. The mood was, surprisingly, light.

— Third-round leader Harris English started the day with a two-shot lead. He led by three after 10 holes. He then needed a 12-foot putt on 18 to drop just to make the playoff — and missed.

— Bryson DeChambeau was one of two players two strokes back to begin Sunday. He was tied for the lead after just one hole. He tied for eighth.

— Cam Smith was the second golfer to start the final round two down. He was tied for the lead with just one hole to play. He tied for fifth.

— Scottie Scheffler and Ian Poulter were five back after 54 holes. Poulter shot a 72, Scheffler a 74 and finished tied for 10th and 14th, respectively.

The eventual winner perhaps summed it up best.

“I was watching the scoreboard — I like to know what I need to do and where I stand,” said Abraham Ancer, who started Sunday four shots out of the lead. “At one point I saw Harris, I think he was 20 under, and I was like, man, he’s running away with it, I’ve got to make some birdies. Putts weren’t dropping. I was hitting some good shots, but I wasn’t really getting much out of them and I was getting a little bit frustrated out there. I was like, man, I need to make a move, and I was just putting myself in tough spots or long putts; I wasn’t hitting it close.

“Yeah, it was definitely a surprise. I keep looking, I was like, man, they just came back two strokes. Another two, I’m tied for the lead? Walking off 16, I couldn’t believe I was tied for the lead there. I felt like I was maybe four strokes behind. You just don’t know what can happen out here, man. It’s crazy. It’s a tough golf course. Like I said, you get a little bit of wind out there, small targets, anything can happen.”

And everything practically did.

A closer look at the chaos at TPC Southwind:

English overcame an opening bogey with birdies on 3, 4 and 8. But it was around this time that he and DeChambeau were put on the clock for slow play. And the threat, he said, doomed him.

At one point, No Laying Up tweeted that it heard English say on the CBS broadcast: “I hate rushing.”

“You definitely start the day in one rhythm, and then you kind of get out of that having to walk faster, having to do everything a little faster because you don’t want to get a bad time,” English said afterward. “It was tough, the wind was swirling obviously coming down the stretch, there was some very important shots in there, and it was tough. But I’ve got to learn to slow down, go through my routine and not really worry about being put on the clock.”

English would finish with a 40 on the back nine.

“It is tough, and you’ve got some very important shots coming down the stretch here, some tough par-3s, some uncomfortable shots out here,” English said. “When you feel like you’ve got to rush, you feel like you’re not 100 percent ready for the shot and I did that a couple times today and that’s really the only thing I regret.”

DeChambeau, two months ago at the U.S. Open, led on the back nine at Torrey Pines, only to shoot a 44 across the closing stretch and tie for 26th.

He was just three shots better on Sunday.

DeChambeau, after a birdie on the 9th, bogeyed the 10th after hitting his tee shot 335 yards — and into the water about 335 yards from the tee. He triple-bogeyed the next hole — as English doubled — after getting an unfortunate bounce on the downslope over the green that kicked his ball into the drink. He then limped home with bogeys on 15 and 18 — and a par on the par-5 15th after just hitting over the green in two.

DeChambeau, playing in his first event since withdrawing from last week’s Olympics due to a positive Covid test, did not speak to reporters afterward. He, too, was on the clock for slow play, and English said fans were renewing “Brooksie” chants that had started a few months back in light of his spat with Brooks Koepka.

“Yeah, it’s not real fair for them to call him “Brooksie” a lot,” English said. “It kind of sucks and obviously he hears it and it affects him a little bit and he doesn’t like it and I think that causes them to do it more. It just sucks that that’s out here right now, that they’re trying to irk people like that. It’s just unfortunate.”

Smith, despite four bogeys, was tied for the lead with one hole to play.

One shot on that one hole cost him.

After a drive right and into the trees, Smith opted to take a risky route through the forest — CBS analyst Mark Immelman described the window that Smith was looking to hit through as “minute.” He’d hit a tree, his ball ricocheted out of bounds, and he’d miss the playoff by two shots after a double bogey.

“Yeah, there was a little gap up there,” Smith said. “I had to hit like a medium flight draw, and I tried to hit it. I mean, I wanted to win, I didn’t want to chip it out and leave my chances in Harry’s hands. He was still 16 under at the time. I wanted to make sure I had a good look at birdie, and I just didn’t execute it.”