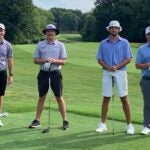 Fresh off a missed cut at the Northern Trust, Joel Dahmen pulled out his phone and sent out a call to action on Twitter. Despite his struggles at TPC Boston, he hadn’t quite gotten his fill of golf for the week. He wanted to play a friendly money game to satiate that desire.

“This might be a bad idea, but I’m going to throw it out there,” he wrote. “I have the weekend off and I’m looking for a money game tomorrow. I’d prefer it be close to Foxborough area. Want to play for enough money that it matters, but not enough to have to sell my house.”

Dahmen’s mentions were filled almost immediately. It seemed every serious (and not so serious) golfer in the Boston area wanted in on the action with the pro. The tweet ended up with over 400 replies and 5,400 likes, and the word was officially out.

About that time, Cody Sweeney was getting off work from his job as an assistant pro at Thorny Lea Golf Club in suburban Boston. His phone flashed with a text from his uncle. It was a screenshot of Dahmen’s tweet. His uncle encouraged him to reach out if he was interested. Of course he was interested, but there was one issue — Sweeney doesn’t have a Twitter account. So his uncle reached out on his behalf, pushing send 12 minutes after the initial rallying cry.

“My nephew will do it at Thorny Lea in Brockton MA tomorrow,” he said. “He is the assistant golf pro there, DM if you want and I can set you up — some good members there too.”

Sweeney also sent Dahmen a message of his own on Instagram — a social media platform he actually does use — expressing interest. Out of the hundreds of replies, Dahmen zeroed in on Sweeney and Thorny Lea. The two went back and forth with messages to decide the stakes and settled on a four-ball match.

Sweeney called on his cousin Andrew Roy, a plus handicap with professional-golf aspirations, as his partner. Dahmen chose PGA Tour winner Nick Taylor, his roommate from their days as teammates at the University of Washington. The locals got a few strokes per side, and the match was set for 9:30 a.m. Dahmen just had one last question — could they wear shorts?

The group showed up to a healthy gallery on hand to watch, with around 20 members following along (while socially distant, of course) in carts. After all, it’s a rare thing to get to watch Tour pros up close these days. The game was simple: $300 Nassau. It’s a seemingly insignificant amount for pros who play for millions every week, but for their competitors, it might as well have been for the FedEx Cup bonus.

“My ultimate goal is to get where they are,” Roy said. “So to get to come out and play with them and see how they do it was really cool. They’re just so steady. They just don’t make a lot of mistakes.”

The back nine was much more fortuitous for the side representing Thorny Lea. What once looked like an insurmountable lead turned into a tightly contested match coming down the stretch, and with a gallery on hand, friendly banter was flying from all sides. Though the life of a pro can be filled with pesky fan interactions, Dahmen and Taylor were receptive and responsive with the gallery throughout the day.

“It was just a casual Saturday morning for them,” Roy said. “Joel was just like one of the guys.”

Standing on the 18th tee, the match was all square. As they prepared for the deciding hole, the horn sounded for inclement weather. But with a special blessing from the head pro, they got permission to finish the match on the par-4 finisher.

With every other golfer pulled off the course, the gallery around the 18th green swelled to the hundreds — one of the largest crowds golf has seen since March. All four players found the fairway and hit solid approaches into the green, but with the hole stroking for Sweeney, he had a distinct advantage that proved to be the difference. Dahmen and Taylor couldn’t convert for birdie, a cruel lip out depriving them of a halve in enemy territory.

“It was probably one of the coolest things I’ll ever be a part of by far,” Sweeney said. “It’s something I’ll certainly remember forever.”

Sometimes it pays off to be on social media.