WATCH: PGA Tour pro mistaken for fan — and he hilariously plays along 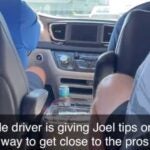 Joel Dahmen and his caddie, Geno Bonnalie, listen to advice from their shuttle driver.

Say what you will about the now-viral video of a shuttle driver in Hawaii dishing advice to the man in his van on their way to their Plantation Course at Kapalua, but say this, too:

If PGA Tour pro Joel Dahmen wanted a good seat for this week’s Tournament of Champions, then this tip is as good as it gets:

“Before the end of the tournament, move from where you are to the grandstand, get yourself a seat.”

Of course, you, the golf fan, know the humor here: Dahmen won’t need a ticket — he’s already punched his in for the winners-only event after winning, for the first time, back in late March at the Corales Puntacana Resort & Club Championship. Dahmen’s caddie, Geno Bonnalie, also found it funny, recorded 21 seconds of the interaction and shared it to social media, and as of late Thursday afternoon, it had garnered just under 3,000 likes and 100 comments.

Including maybe one from the driver.

In the video, after the recommendation, Dahmen played along.

“Watch it all finish out, huh?” he said.

“Yeah, usually you can get down there and watch all 39 players finish the last hole,” the driver said. “If that’s what you want to do. If you wait too long, though, you’ll …”

And the video stopped. From there, in response to a comment on Twitter, the driver “dropped us off at the spectator entrance and we just walked in from there,” Bonnalie said, and on Wednesday afternoon, the longtime caddie posted the video, along with this comment on Instagram: “@joeldahmen is always a good sport.” Of course, it’s neither the first time, nor the last time, a Tour player will be mistaken for a Tour fan, and about five hours after the video was shared, it drew this response from @dale_guttman, who appears to have been the driver:

“Worked a 14 hour day on a Volunteer basis driving the shuttle,” the account wrote. “Really don’t appreciate a man who handles another man’s bag and cleans his balls mocking me though.”

Bonnalie responded an hour later, and the exchange continued for about four total.

“Hi Dale, first off, I mean this sincerely…thank you for volunteering,” Bonnalie wrote. “I posted that video because: 1. It was funny, & 2. This kind of thing happens all the time. I’m not making fun of you or anyone who makes this mistake at all. It was an honest mistake that was funny.”

“And I apologize for my sophomoric comment,have a fun time in Maui,” @dale_guttman responded.

“Not a problem at all. I hope we get to see you again this week,” Bonnalie said.

On Thursday, Dahmen, in his first-ever round at the tournament, shot a bogey-free 68. And the fans in the grandstands, on the par-5 18th? They saw him hit his third shot to 2 feet on his way to a birdie.

“Hey Dale, take it form a total internet stranger that Geno and Joel are two incredibly kind and altruistic dudes,” wrote @goldingolfin as part of the Twitter chain. “I know it’s not worth much, but from personal experience I guarantee this post was made completely without malice.”

“I’m sure Geno and Joel are fine people and part of me can appreciate the joke,” @dale_guttman responded. “Legit I was told that the players had their own vehicles and since I’m not a huge golf fan didn’t recognize Joel. Good luck in the tourney Joel and thanks for the story.”