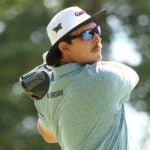 Joel Dahmen tees off on the 12th hole at TPC Boston on Friday.

Joel Dahmen won’t win any money this weekend on the PGA Tour.

Dahmen still wants to win some.

About four hours after his second round at the Northern Trust at TPC Boston on Friday, Dahmen learned that his two-round total would not make the cut for the weekend. He would not be challenging golf’s best. He decided he would challenge Twitter’s best.

“This might be a bad idea, but im going to throw it out there,” Dahmen typed into his iPhone. “I have the weekend off and I’m looking for a money game tomorrow. I’d prefer it be close to Foxborough area. Want to play for enough money that it matters, but not enough to have to sell my house.”

After about an hour and a half, he had 150 responses.

Most wanted to know whether he would give strokes.

“This is a no-brainer Golf Channel reality show: red-ass Tour players who miss the cut taking out their frustrations on Twitter followers,” GOLF.com’s Alan Shipnuck wrote in response.

“We can make it fair with handicaps,” responded Dahmen, ranked No. 59 in the world.

“I have @Joel_Dahmen as roughly a +7.4 (adjusted for tour conditions),” Stagner wrote. “If you are the one that ends up playing against him, negotiate aggressively for as many strokes as you can get.”

At around 6 p.m. ET, Dahmen said he had his course.

“Thanks to everyone who reached out!” he wrote. “This got way more action than I anticipated. I will be sure to do more of this going forward, although I prefer not missing cuts. I’ll update everyone tomorrow on the action”