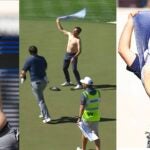 Harry Higgs and Joel Dahmen brought a different look to the 16th hole on Sunday.

The latest, nakedest moment in the debaucherous desert get-together at TPC Scottsdale started with a tweet.

On Saturday night, Joel Dahmen posted his tee time notification for Sunday’s final round: 10:43 a.m. off No. 10 alongside his pal Harry Higgs.

Dahmen and Higgs weren’t exactly in contention; the two entered Sunday tied for 64th at the WM Phoenix Open. But Dahmen was invigorated by the chance to play alongside Higgs.

“Dreams do come true!” he wrote. “If we get enough retweets [Harry Higgs] will take his shirt off on 16 tomorrow!”

Dahmen logged a significant number of retweets (some 7,000+) but Higgs played it cool.

“You funny,” he wrote by way of reply.

It wasn’t an outright denial, at least. Dahmen’s dream was alive.

Higgs is a cult hero on Tour known for his love of life, Tito’s and unbuttoned shirts. But popping his top on the wildest stage on the PGA Tour? That would be a new frontier even for the Big Rigg.

The two stepped to the 16th tee to raucous applause, but unlike Carlos Ortiz (or Sam Ryder, a day before) neither threatened an ace. Dahmen left himself a 17-footer for birdie, while Higgs sent his tee shot long and left and chipped to 11 feet.

When he rolled that putt in, the party was on.

It’s tough to describe exactly what happened next other than to say that pure instinct seemed to take over. Higgs lifted his shirt, flashing the crowd, knocking off his hat and sending the assembled onlookers into a frenzy.

The beer cans followed immediately; Higgs was dodging various half-filled recyclables before he even got his ball out of the hole.

Then Dahmen, never one to miss out on the action, joined his buddy, ripping off his shirt entirely (he’d just finished up a par putt of his own) and waving his light-blue Travis Mathew like a Terrible Towel. That invigorated Higgs, who charged across the green and leapt in some sort of Michael Jordan-inspired fist-pump leap as spike marks and beer marks built up on the green’s edge. It was outrageous. It was majestic. It was a lot of fun. It was unlike any scene I’ve seen in professional golf.

The magic didn’t last for long; Higgs hit his next shot in the water and Dahmen four-putted (yes, four-putted) the 17th green. It didn’t matter; neither was likely to crack the top 50. But fans got to see more — a whole lot more — of two of their favorites. Neither the tournament nor the game of golf seemed to split apart from the sight of skin nor jubilation.

As for the fans at 16? They still had a couple hours to go before the leaders rolled through. But now there was plenty to talk about as they headed to the beer line, looking for refills.