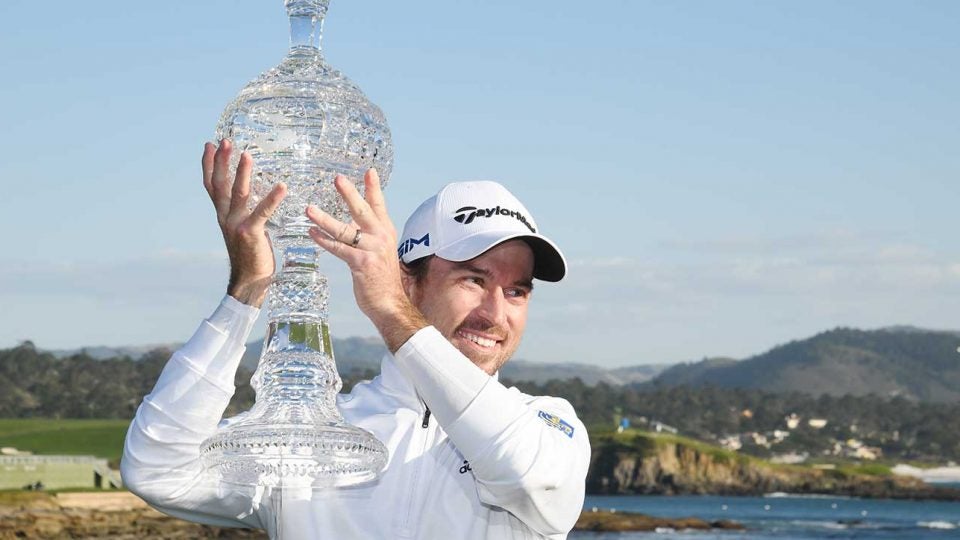 PEBBLE BEACH, Calif. — Phil Mickelson kicked it away. Nick Taylor’s life changed forever. But the story of this Crosby Clambake was the telegenic host venue. A dry winter and a wee breeze on Sunday turned petite Pebble Beach into a monster, providing the U.S. Open conditions that the USGA was too timid to summon last summer.

With Pebble playing like an ice rink, Mickelson suffered a series of pratfalls, playing the final 11 holes in five over to sink his chances at winning a record sixth Clambake. Taylor, a 31-year-old Canadian, wobbled and bobbled early in the back nine but he started faster than Mickelson and finished with more aplomb, summoning two late birdies for his second win on Tour but first since his rookie season in 2014. It hasn’t been an easy road for the 2010 Ben Hogan Award winner.

“We always say he is apologetically Canadian,” says Taylor’s agent, Chris Armstrong. “It’s a joke but there’s something to it.”

Recognizing that he might be too nice for the cutthroat world of the Tour, Taylor (a doting new dad, Star Wars obsessive and amateur astronomer) has spent the last two years fortifying his mental game, and it made all the difference on Sunday.

Mickelson has long enjoyed a love affair with Pebble Beach, where his grandfather caddied when the course opened in 1919. Phil the Thrill had summoned some vintage magic on Saturday, playing H-O-R-S-E with his wedges and whetting the appetite for a triumphant final round. But Taylor showed determination in the face of an apathetic crowd, birdieing the 4th hole with a disciplined layup off the tee even after Phil made a point of announcing he would wait to hit because he was going to try to drive the green with his driver. (Calves, bombs, etc.)

On the par-3 5th, Mickelson stuffed his approach but Taylor topped him with a curvy 11-footer. Then this polite Canuck rattled his Hall of Fame playing partner by holing a bunker shot for eagle on the par-5 6th. Mickelson hadn’t missed a shot yet but was still losing ground.

“I got outplayed,” Mickelson said. For emphasis he added, “I mean, Nick played better than I did.”

News
Nick Taylor chips in for eagle, is heating up at Pebble Beach

By the time the leaders reached the 8th hole the gentle morning zephyrs had given way to ripping gusts of 25 miles per hour. After a week of mostly cloudless skies Pebble Beach had turned gloriously firm and fast and fiery. “It was an incredible test,” said Charl Schwartzel, who tied for 5th. “You couldn’t fake anything out there. You had to hit it flush and play shots: high, low, draws that rode the wind, fades into the wind. If you mishit the ball the penalty was severe.”

Mickelson stepped to the 8th tee down by two strokes. Instead of flirting with the cliff at the end of the fairway he pulled a more conservative 2-iron and then proceeded to pop it up; his ball was so devoured by the wind he was left with another 2-iron in, from 230 yards out. Mickelson took dead-aim at the flag, eschewing a more sensible play to the front-left. His ball was ejected by the firm putting surface, bounding long into the rough. A homely double-bogey ensued and Mickelson was never the same again.

Phil’s debacle on 8 started on the tee. An uncharacteristically conservative play left him with 230 in! *Then* he got aggressive and went at a flag when the baked green is almost impossible to hold with a long-iron…and long is dead. Some head-scratching stuff.

After Taylor made a stout birdie on the 9th hole his lead was a whopping five strokes but it was far from over, as he was now turning back into the wind. “From 11 to the finish was everything you want. Maybe more,” said Matt Jones, who also tied for 5th. “The second shot into 11 was brutal. The second shot into 13 wasn’t fun. The third shot into 14 was miserable. The tee shot into 17 could drive you crazy. I can go on if you want.” To summarize, Pebble played exactly the way it should.

“We don’t need a big report: this right here is the answer to the distance debate,” Peter Malnati said after a Sunday 75 that dropped him into tie for 11th. “Firm greens, small targets, and some wind.” Alas, golf is an outdoor game, and the weather often compromises such a setup. But on Sunday the exacting conditions exposed Mickelson while heralding Taylor’s arrival. He out-Phil’d Phil on the 15th hole, chipping-in for a birdie that Taylor called “obviously massive.” Then with 17 playing straight downwind he feathered an 8-iron to six feet to ice the victory, earning a trip to his first Masters and all the other goodies that come with a big-time Tour win. “That’s an impossible shot,” Jones said of the 17th hole. “I don’t know how you can keep the ball on the green.”

All it takes is talent, grit, imagination and execution. Pebble Beach brought out the best in Taylor. In the end, both the course and the man who survived it were the winners.