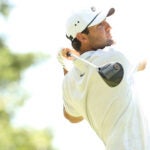 Scottie Scheffler watches a tee shot during his second round at The Northern Trust on Friday.

Scottie Scheffler was zoned in. The 24-year-old PGA Tour rookie shot a scorching 12-under 59 on Friday at TPC Boston to etch his name into the history books and vault up the Northern Trust leaderboard.

Scheffler’s just the 12th player to shoot 59 or better in PGA Tour history. The last time someone recorded a sub-60 round was last fall, when Kevin Chappell shot 59 at the Greenbrier.

On Friday, Scheffler made four straight birdies on Nos. 4-7 and turned in six-under 30. He then got up-and-down for birdie on the par-5 18th to notch his 59, which he sealed with a five-foot putt.

Scheffler made at least three consecutive birdies three separate times in his round. Following his first-round 70, he’s now tied for the lead at TPC Boston and in prime position to not only contend on the weekend but also to extend his season to next week’s BMW Championship and, perhaps, the Tour Championship.

Scheffler, who dominated on the Korn Ferry Tour last season to get a promotion to the big tour, is coming off one of his best performances of his PGA Tour career. A couple of weeks ago he was one off the lead through 54 holes at the PGA Championship and played in the final pairing with Dustin Johnson on Sunday at TPC Harding Park. He shot 68 and tied for 4th.