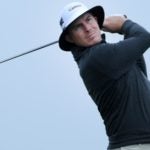 You don't want to get stuck with slow players at Mesa Country Club.

What’s a typical week like for PGA Tour players when they’re away from the Tour? The answers vary, but it’s safe to say it involves a lot of practice and time in the gym. And for Joel Dahmen, it consists of a lot of fun, too.

On a recent episode of GOLF’s Subpar, hosts Colt Knost and Drew Stoltz asked Dahmen about what his typical week has looked like as he’s prepared for the return of the PGA Tour. True to his candid personality, the answer didn’t disappoint.

It’s pretty far cry from the gym and Peloton sessions that have crammed Rory McIlroy’s schedule as of late, but fans have come to expect some eccentricity from the 32-year-old.

“Just a grind, that’s how Tiger used to get ready,” Stoltz joked.

Dahmen went on to explain at his home club of Mesa Country Club, they play in groups of six. But there is a creative rule in place to enforce a swift pace of play.

It’s a pretty creative solution to the pace of play problem that affects golf. Maybe the PGA Tour should explore implementing the provision to speed up some of their rounds (we’re looking at you, Bryson).

Dahmen said the sixsomes he plays in usually play head-to-head with three separate teams per group, and the amount of cash he takes home is all dependent on how his amateur partner plays.

“As a pro if you shoot 64, you can lose a hundred bucks,” Dahmen said. “So it’s really just about having fun.”

The method might be unconventional, but it’s hard to argue with the results. Dahmen is currently ranked 69th in the world and is sitting at 37th in the FedEx Cup standings as the Tour gets set to ramp up in two weeks at the Charles Schwab Challenge.