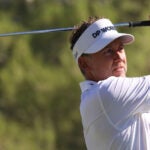 Ian Poulter is playing golf this week at the CJ Cup at Shadow Creek Golf Course. He appears to be staying at the Encore casino. He’s in Vegas.

Poulter’s in Vegas pants, too. Thursday morning, he walked the gaming floor of what appears to be the Encore on his way to the first round. He recorded a few of his steps. Poulter extended his right leg.

“Whilst in Vegas…let’s do Vegas!” he tweeted.

“Casino chip time,” Poulter said on the video. “Let’s do this.”

His play was nearly as perfect as his pants. Poulter shot a 3-under 69. He is four shots behind fellow Englishman Tyrrell Hatton.

“Those are colorful pants he has on today,” one announcer said on the Golf Channel broadcast while Poulter putted for birdie on the 563-yard, par-5 7th.

“I’m sure those are custom made too,” another announcer said. “He picked out the fabric.”

Poulter made the 8-footer.

“Good putt. Must feel comfortable in those pants,” the first announcer said.

Poulter’s pants have been plenty perceptible in the past, too.

He’s worn nearly every color, the Stars and Stripes and the Union Jack.

“I don’t like the way most people dress on the golf course,” Poulter told BBC Sports after wearing the Union Jack pants during the 2004 Open Championship. “My personality is not like that, and I want to be slightly different.”

“If i could putt like him, I’d wear those pants every day,” one of the announcers on the Golf Channel said during Thursday’s broadcast.