‘We just play a silly game of golf’: The emotional reason why Ian Poulter honored Ukraine 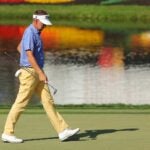 Ian Poulter during Thursday's first round of the Arnold Palmer Invitational.

Ian Poulter, never shy about wearing his heart on his sleeve, displayed it Thursday on his entire shirt and pants.

During the first round of the Arnold Palmer Invitational, the Englishman wore a blue polo and yellow slacks, the colors of Ukraine, which 5,500 miles away, continued to defend itself from an invasion by Russia. Poulter, known best for both his Ryder Cup success and the emotion shown in achieving it, said after his round he dressed in the colors “in respect to those suffering.”

“Yeah, I think it’s hard, when you flick the news on right now and obviously you see the devastation that’s going on around the world and you feel for the people in Ukraine,” he said. “Just wearing a similar color today in respect to those suffering over there is the least I can do.

“Just everyone’s probably thinking of all those families that are affected right now.”

When asked what made him think of doing it, Poulter said it was hard not to think of the conflict that began a week ago. He appeared to be the only golfer over the past two tournaments to honor Ukraine.

“Hopefully, just the thoughts and prayers for the families out there.”

A reporter then asked Poulter: “The idea that you’re out here playing golf, it’s tough with what’s going on in the world?”

“It just seems like every time you think there’s light at the end of the tunnel, something else comes along,” he said. “It brings it into perspective pretty quickly. We just play a silly game of golf while others are in the world suffering.”