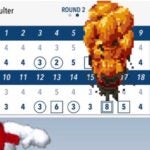 Ian Poulter, at about a little before 4 p.m. local time, was three-under for his round with three holes to go, eight-under for his World Wide Technology Championship at Mayakoba tournament and making plans for the weekend.

Poulter, at about a little after 4 p.m. local time, was one-over for his round with two holes to go, four-under for his World Wide Technology Championship at Mayakoba tournament and on the cutline for the weekend.

Poulter, at about 4:30 p.m. local time, was two-over for his round with no holes to go, three-under for his World Wide Technology Championship at Mayakoba tournament and done for the week.

Then he picked up his iPhone.

“Sometimes sport throws you interesting scenarios today was one of those,” Poulter wrote on his Instagram story at about 5:30 p.m. local time. “Non comital to a shot turns what was a great tournament into packing bags and heading home. What looked like a T10 heading into the weekend. Never have I been so disappointed with the outcome of today. I have to evaluate WHY and move onwards. Poor focus is usually the culprit. But WHY ??????”

Poulter’s tournament unraveled on the 515-yard, par-4 16th at El Camaleon Golf Club, where he took a penalty after his second shot, and one after his fifth, and marked himself down for a quadruple-bogey eight. On the next hole, the 386-yard, par-4 17th, he was penalized after his second shot and finished with a bogey. He parred the 18th, but he had gone from eight-under on the 16th fairway to three-under on the 18th green.

After a night’s sleep, he wrote: “Well a good nights sleep normally shrugs a snowman off but it didn’t. Could still be a little warm under the collar today. Still disgusted with the finish yesterday. Time to be more ruthless I feel.”

Three hours later, Poulter posted a picture of his scorecard — with smoke coming out of the eight and a picture of a snowman. An hour after that, he wrote: “I will never except a mistake as a mistake there is always a reason. I know the reason I’m just furious it still happens 24 years in. Mirror, Punch bag, still learning.”

And then he was done. On Saturday afternoon, Poulter shared a picture of his flight home.