Why Ian Poulter sprinted No. 17 at TPC Sawgrass (and why it was brilliant) 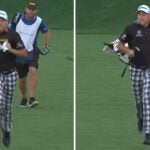 Ian Poulter played No. 17 fast (and hit it close!) on Thursday at TPC Sawgrass.

PONTE VEDRA BEACH, Fla. — Of every hole played by every golfer on a soggy Thursday at the Players Championship, Ian Poulter played the best of all.

How much did we love his 17th hole, which he played in two shots — at a dead run? Let us count the ways.

Why the run? Poulter’s main motivation for sprinting off the 17th tee and up to the island green was to finish his round. When play is halted for darkness, the groups on course can elect to finish the hole they’re currently playing — as long as at least one player has teed off on that hole.

So Poulter hit his tee shot at 17, ran to the green, holed his putt, grabbed driver, ran to No. 18 and teed off into the impending darkness. He even got up-and-down for par at No. 18. Instead of waking up in the wee hours to get back to TPC Sawgrass in time for a drizzly early-morning finish, Poulter was instead able to sleep in and relax on Friday, all but assured he wouldn’t play a single hole on a turbulent Friday.

2. He set a pace-of-play gold standard

There’s never a bad time to set a good example. Take notes, kids (and, more to the point, other PGA Tour pros): You can play fast and well!

3. He got the good weather

Thursday evening was glorious in Ponte Vedra. Sunny. Calm. Soft. Even as darkness fell, it was much preferable to the unknown of a wet Friday morning. Sure, it looks a little desperate — but I actually think it was the right call.

4. He helped out his playing partners

Poulter was a hero to his playing partners, too. While Jhonnatan Vegas and Pat Perez moseyed up 17, Poulter was surging up ahead. They got to finish out their rounds, too, but didn’t have to break a sweat in the process.

And it worked! Perez even finished with a birdie at No. 18, the toughest hole on the course. Hopefully.

Did we mention that Poulter hit one of the best tee shots of the day at No. 17? Like a good three-point shooter coming off a screen, Poulter quick-shotted a short iron to 3 feet, 7 inches. And like an Olympic biathlete, he steadied his heart rate as he approached the green, poured in the birdie putt and was off to the 18th.

It was the highlight of Poulter’s day, capped off a stretch of three birdies in five holes and bettered his score to one-over 73, in striking distance of the cut line — whatever day that cut will come.

His partners fared even better. The group played 17 and 18 at a collective two under par, Perez posted two-under 70 and Vegas posted three-under 69. Good times.

6. He scored some bonus cardio

At the end of a long day at work, the best thing you can do is blow off a little steam. And doctors say even 60 seconds of high-intensity training can offset lengths of inactivity.

Poulter made his off-day plans clear: The latest season of Drive to Survive, Netflix’s Formula 1 show, came out on Friday morning. He’ll be posted up watching.

“When you’re half man half mattress and you love Drive to Survive. A little speed golf sorts both out,” he tweeted along with Thursday’s video.

But it gets better: Poulter actually predicted this confluence of running up No. 17 and binging Drive to Survive nearly a month in advance. That’s because he’s done this before! In the third round of the 2011 Players, Poulter was playing alongside Dustin Johnson and running out of daylight. He sprinted down the 17th, two-putted for par, hit over the group in front of him at No. 18 and finished before the horn.

So on Feb. 16, Poulter tweeted that footage, paired it with the release of Drive to Survive’s fourth season, and ultimately the universe made it happen just so.

I appreciate a man on a mission. And given the weather forecast, his may not be the last strange race to the finish this weekend.