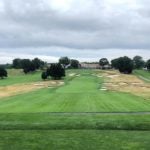 The toothy 18th tee shot at The Beast, Bethpage Black.

THE FOOL swaggered his way through the parking lot, his clubs slung aloft on his shoulder, carefree. He approached me at a quarter-to-eight, just as the sun poked through a thicket of grey skies and upon the wooden sign bearing my greeting:

The Fool walked with the presence of a seasoned golfer — legs long, hat square, shirt tucked neatly, trim to his chest. He stretched and prepared with boisterous gusto, glistening sweat in the morning mist. But his aura did little to hide his boyish face or, for that matter, his trembling hands.

Some foes are more formidable than others, but this one? I mean, come on. I couldn’t help myself. I cast a deep laugh that rumbled upon him from the heavens. His eyes darted in my direction, excitement sliced on the edge of raw nerve.

The Fool had awoken me, THE BEAST.

This is the story of the first battle between the Fool and me, Bethpage Black, The Beast. A story that begins at two-minutes-to-nine, when The Fool’s heart leapt into his throat.

The Fool placed his bag beside the tee box and unsheathed his driver. The crowd, a dozen or so, looked on. He had 275 yards left to the corner of the monstrous first fairway, not that he realized. He was distracted by his hands, which were shaking so much it had become difficult to hold the club.

Finally, he swung, sending a duck hook skittering close to the first fairway of the nearby Green course.

“Boy, that’s some tee shot,” a member of the peanut gallery hooted.

Admittedly, I take great pride in breaking the will of those foolish enough to duel with me. It’s part of my allure. I’ve shattered dreams and pummeled golfers for decades, be their names Tiger Woods or Joe Schmoe; their jackets green, or, in The Fool’s case, just their levels of experience.

But not every golfer has to be broken on their first shot, so I decided to throw our Fool a bone — a perfect lie with a manageable angle back into the hole. To my surprise, he capitalized, sending a near-perfect 6-iron downwind and back into the center of the fairway. A chip and two putts later, he’d recorded an adventurous (but perfectly legitimate) bogey.

He laughed, relieved, as he walked off the first green.

In some ways, the first-timers are all the same. They reach my gates cloaked in presuppositions of what their round ought to be. They’ll leave enlightened to a simple, universal truth: I am the one who decides.

I caution all golfers — not only the novices — from hastily setting forth.

“WARNING,” the famed sign reads at my doorstep. “The Black Course Is An Extremely Difficult Course Which We Recommend Only For Highly Skilled Golfers.”

Many newcomers think they’ll defeat me without understanding me. They’re easy prey, often without giving thought toward strategy or risk. Try as these bumptious braggarts may to overwhelm me solely with their skill, they’ll be lucky to survive the front nine.

Others are wiser. They approach with humility and deference, a willingness to compete on my terms. They understand the dance, even if they haven’t quite learned the nuance of my prosaic waltz.

It wasn’t until The Fool reached the 4th hole that I realized he was both: Equal parts braggart and old hat.

On the scorecard, the 4th plays 518 yards, but it feels about twice that length. The hole siphons directly uphill between a pair of tight fairways. Those capable of keeping their ball from punishing rough and penal sand still face a blind approach into a tricky green complex guarded by deep bunkers. It’s a hole that requires three perfect shots for the average player to sniff birdie, and somehow there was The Fool, lying 2, 75 yards out.

A birdie opportunity might have surprised me, but I shouldn’t have been shocked by what happened next: The Fool skulled the chip, sending a missile off the back of the green and into thick fescue. It took a lengthy search and two more shots for him to exit the weeds. Two putts later, birdie had turned to double-bogey.

I waited with bated breath. Here came my glorious moment. Another victory sat within plain sight. Another golfer, brought to his knees by my might. But The Fool simply shrugged. Now, I was mad.

I might have been laughing earlier, but I certainly wasn’t anymore. I roared as The Fool bombed another drive down the fairway on the par-4 5th. If my normal conditions wouldn’t send him to his knees, I’d summon some help from above.

At first, he didn’t mind the rain. He popped off his glove and joked about forgetting waterproof gear, playing on as the wind and water tattered his belongings. But by the time he approached his tee shot on the 7th hole, his confidence had wavered. Soon, The Fool stood in a monsoon, thunder crackling overhead, his group forced to huddle near a tree. An inch of rain fell in minutes, flooding my fairways and greens.

The Fool returned to a different golf course a half-hour later. Where I had been slick, firm and penal, I’d suddenly become slow, soft, impossibly long. But I wasn’t the only one who’d changed. He was drenched — his shirt stuck to his body from moisture and his shoes sloshed with every step. His back and legs had stiffened, his adrenaline wilted.

The Fool’s clothing would be dry several hours later, but in the meantime I’d already exacted my revenge. Five double-bogeys in seven holes — a ‘string of 6s’ as he called it — put me back in the driver’s seat for good. On one hole during the stretch, a gorgeous iron shot from the rough landed 25 yards short of its intended target. On another, a six-footer for birdie turned into a three-putt bogey. It was beautiful, unmitigated carnage.

Sometimes, The Fool learned, my savagery comes from its subtlety — a two-club rough, a one-ball break, a foot (and mile) of difference between rolling fairway and unforgiving first cut. Others, it comes more obviously, like on the par-4 15th, where a beautiful drive and flushed 6-iron are rewarded with the longest uphill walk of one’s life and a fortunate double-bogey.

But as The Fool turned the corner on my boorish (and breathtaking) finishing stretch, he seemed to conquer both his exhaustion and exasperation. Rather, he seemed grateful for the moment, for his company and even it seemed, for me.

I bid him adieu with a tap-in par on the 18th and he walked off with a smile. It appeared we’d each gotten what we’d hoped for.

I’d emerged the victor, a worthy and overwhelming test of both golfer and man.

He’d left with a story. Of a round in the middle of a monsoon. Of an utter Fool’s battle with a contemptuous, oafish Beast.

Of a reminder that even when this sport isn’t pretty, it’s beautiful.