What one man learned from caddying with Tiger Woods 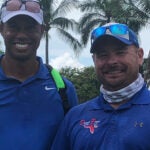 Tiger Woods caddied alongside Derrick Payne in a nine-hole junior tournament on Aug. 15.

Derrick Payne owns and operates a Miami-area golf academy, which means he teaches junior golfers as young as 3 years old. As a result, he’s seen the full spectrum of parenting.

“You see it so often in youth sports but especially in golf, parents trying to live vicariously through their kids. It leads to arguments; we see tears all the time. You see dads working on their sons’ or daughters’ golf swings while they’re walking down the fairway, arguing about decisions on the last par-3.

“And I’m just like, Let them hit the ball! Go find it! Hit it again until it gets in the hole and then be supportive, say great shot. Great effort.”

But on Saturday, Aug. 15, Payne wound up caddying alongside a parent whose caddying style he found particularly admirable.

Payne was caddying for a junior student of his in the 11-year-old division of a Florida tournament when they just so happened to get paired with Charlie Woods — Tiger’s 11-year-old son. While we’re not interested in becoming a part of the Charlie Woods hype train that immediately followed, we are interested in Tiger Woods, caddie dad. And that’s where Payne comes in.

“Look, with what I do, I’m around kids who are playing tournament golf all the time,” Payne said. “We’ve got kids who are 6 years old playing in world championship events. And I’m dead serious when I say that Tiger was the poster child of what I tell my parents to do.

“He let Charlie play. He didn’t get in Charlie’s way. He wasn’t over there arguing about what club Charlie was choosing, he wasn’t lining him up, saying, ‘Hey, let’s do this or that.’ He stayed back, enjoyed it and let him play golf.”

To hear more about caddying with Tiger Woods — and the complex aftermath — listen to this week’s episode of the Drop Zone, which you can find embedded below, at any of the following links or wherever you listen to podcasts. Enjoy!