CJ Cup expert picks: Who our staff thinks will win at Shadow Creek 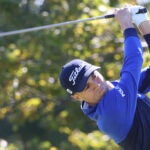 They didn’t win one bet.

Over the weekend, the bettor won the one-buck, 20-bet parlay on the European Tour’s BMW Championship, according to Sportsbet (hat tip to Golf Digest). They bet 20 head-to-heads and won all 20. If Tyrrell Hatton had not had a better score than Victor Perez, and the other 19 picks had won, the bettor would be out their dollar. Same goes for Graeme McDowell, Richie Ramsay, Pablo Larrazabal, Bernd Wiesberger, Kiradech Aphibarnrat, Lee Westwood, Martin Kaymer, Andy Sullivan, David Horsey, Robert Rock, Marcus Kinhult, Masahiro Kawamura, Ian Poulter, Tommy Fleetwood, Patrick Reed, Scott Hend, Eddie Pepperell, Joachim Hansen and Shane Lowry in their matchups.

Let’s see if we can help you win one bet this week.

This week, the PGA Tour is playing the CJ Cup at Shadow Creek Golf Course in Las Vegas. Our Jonathan Wall nearly hit a Matthew Wolff three-bet parlay last week, so we’ll let him kick things off this week. Who does he like?

“Thomas loves this event,” Wall wrote. “Even with a change of venue, I still think he has a good shot to make it three wins in four years.”

To-win: Justin Thomas, +1,200. This is an admittedly hard tournament to pick, without any past results at Shadow Creek to research. But JT is an evergreen favorite who tends to play well in the fall, so he gets my vote this week.

Top 10: Kevin Na (+750) As one of the Tour’s handful of Vegas residents, I’m counting on the fact that Na has more experience playing Shadow Creek than most. Here’s hoping it pays off!

Prop: Top 20, Rickie Fowler, +225. Rickie hasn’t been quite himself on the course lately, but way back when, he, too, was a Vegas resident. I’m banking on some former hometown vibes to kick in and give him the kick-start he needs.

To-win: Patrick Cantlay, +2,800. It takes a certain player to play in Vegas, and Cantlay has shown at the Shriners that he’s that golfer.

Prop: Leader after Round 1, Justin Thomas, +1,800. Last year’s champ, albeit at a different course, starts out strong.

To-win: Justin Thomas, +1,200. Thomas loves this event. Even with a change of venue, I still think he has a good shot to make it three wins in four years.

Prop: Leader after Round 1, Matthew Wolff, +2,800. No reason to hop off the Wolff bandwagon.

Top 10: Shane Lowry, +600. Guy just pegged it pretty well in England. Can he bring his game with him to Vegas?

To-win: Collin Morikawa. +2,800. A great ball-striker on a course with relatively uncomplicated greens. This week sets up sweetly for our reigning PGA champ.

Top 10: Daniel Berger, +275. Fresh off a little downtime, Berger should be tan, ready and rested for another strong showing. The man has become a human ATM.

Prop: Hole in one in the tournament, yes, +200. Shadow Creek has a couple of very gettable par-3s with some easy-access pin positions. I suspect we’ll see some of those in this week’s setup. Makes for good TV.

To-win: Tyrrell Hatton, +2,500. I’m pulling for Tyrrell this week, if for no reason other than to keep #HoodieGate alive. Some people love chaos. I’m one of those people.

Top 10: Daniel Berger, +275. He’s played great golf all year. It’s now or never to place his name firmly in the spotlight and force Augusta National’s hand for a Masters invite.

To-win: Scottie Scheffler, +4,100. Scheffler was one of the hottest players in the world to close out last season, but an ill-timed case of Covid-19 kept him from rolling that heater into the new season. With a top-tier field and the bright lights of Vegas shining, I like Scheffler to rise to the top. The 24-year-old isn’t afraid of the spotlight.

Top 10: Patrick Cantlay, +175. The steady Cantlay loves him some golf in Las Vegas and I see him racking up another top 10 at the CJ Cup.

Prop: Decided by playoff, yes, +400. The bet hit for me last week, here’s to another week of bonus golf.

To-win: Xander Schauffele, +1,400. Playing at a well-known course but unknown Tour venue, I’m not going to try anything cute. I’m going with one of the game’s steadiest bets.

To-win: Xander Schauffele, +1,100. I listened to Xander’s appearance on the Drop Zone, and now I’m sold. The Xander stock is about to rise, as Sean Zak says, and it starts this week.

To-win: Matthew Wolff, +2,200. Wolff nearly won last week in Vegas, and there’s no reason to believe he won’t play well again and have a chance on Sunday. I’m riding the hot hand.

Prop: Winning margin, one stroke, +250. We won’t get another playoff this week, but it’ll be close.

To-win: Justin Thomas, +1,200. Dude just shows up, week in and week out. This week will be no different on a course that’s as pristine as his swing.

Top 10: Daniel Berger, +275. These odds all stink. Berger’s seem like the least stinky.

Prop: Top 4 American, Cameron Champ, +2,200. He and new bagman John Wood are going to click at some point — hopefully this week.