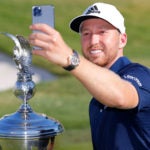 No fans were allowed at the Charles Schwab Challenge this week, one of the safety measures in place as the PGA Tour returned to play after a three-month break due to the coronavirus. The cheering was limited to those who owned homes around Colonial Country Club in Fort Worth, Texas, and the few players and workers on the grounds. Things were quiet.

Which made the collective gasp from those watching at home all the more louder.

Daniel Berger won the Challenge on Sunday after Collin Morikawa’s 3-foot par putt on the first hole of the playoff lipped out of the right side of the cup. Seconds before the miss, Berger sunk a 2-footer for his par. Seconds after, the loud silence, then a subdued celebration from Berger.

Berger reached the playoff, with a score of 15 under, only after a birdie on the 18th, his putt giving him a four-under 66. Morikawa got to 15 under with a birdie on the 14th, and he finished with a three-under 67.

Xander Schauffele, the third-round leader, Bryson DeChambeau, Justin Rose and Jason Kokrak all had chances to make the playoff with putts on the 18th. Schauffele also had an opportunity on the 17th. But after dropping a 31-footer on 15 and a 25-footer on 16 to get to 15-under, he suffered a brutal lip out when his 2-footer for par did a full 360 around the cup.

Berger had a share of the lead for a little over a half hour.

He started the day two strokes behind Schauffele, then jumped to a share of the lead at 14 under with a birdie on 8. He gave it back on the next hole, then played a bogey-free, two-birdie back nine, his 10-footer on the last getting him to 15 under.

On the playoff hole, played on the 17th, Berger played it safe with an iron off the tee after Morikawa hit his drive right. Berger’s approach jumped over the green, but he was able to get up and down for the win, his third on Tour. His 67 was also his 28th consecutive round of par or better on Tour.

Schauffele began the day with a one-shot lead, and 13 players were within three shots.

The leaderboard stayed packed. At about 2:45 p.m. ET, five players were tied for the lead at 13 under, and four players were a stroke behind.

DeChambeau had stormed to the lead after a birdie at 15, only to send his approach over the green on the second-to-last hole, then fail to save par. Schauffele had stormed back when he had reached the hole, making a 31-footer on 15 to save bogey after he hit into the water, then a 25-footer on the 16th to get back to 15 under. He gave it right back with his lip out, as Morikawa would in the playoff.

Kokrak tied for the day’s low round with a 6-under 64. Jordan Spieth and Justin Thomas, among the players who started the day tied for second, each shot 1-over.

Rory McIlroy lost it on the front nine

Through 54 holes, Rory McIlroy was in contention, sitting T9 and three shots off the lead.

After nine holes on Sunday, he was out.

The troubles started immediately with a bogey on the par-5 1st. He then added bogeys at 4 and 5. But his round really unraveled at the 7th.

After a drive left, it took him three more shots to get on the green, where he then two-putted for a double. A bogey on 9 gave him a six-over 41 on the front nine.

McIlroy shot two under on the back and finished with a four-over 74.