Do lost-ball search parties give some pros an unfair advantage? 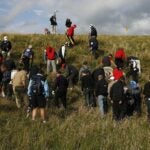 Some search parties are larger than others.

One of the most frustrating things in golf is the lost ball.

Fortunately for Lee Westwood, as he played last week in the Scottish Open at the Renaissance Club, up the coastline from Muirfield, SkySports TV cameras helped him search for his errant shots not once but twice.

David Shacklady, who plays on the European senior tour, wondered about the fairness of it all in this sensible tweet, which was brought to our attention by golf writer Geoff Shackelford:

“Nothing against Lee Westwood but for the 2nd time today Sky TV and Ken Brown using replay to help find his ball yet even though they showed Lucas Herbert’s drive go in the grass I never saw any TV replay to help him and he never found it. How can this be fair?”

Fair enough, but Shacklady’s case is not getting a particularly sympathetic hearing in this court.

A basic tenet of golf is that if you can help you should help. That means playing partners, who are of course also opponents, help explain rules to one another, speak up before a player potentially breaks a rule and help one another find MIA golf balls.

In the last of these categories, fans also help search for balls, just as fans may also serve as pro bono rules officials. A TV camera is, in this sense, standing in for fans who cannot be there in person. A TV camera cannot ignore a golf bag with 15 clubs in it. Likewise, a TV camera cannot not be brought in to help a player find a ball.

Yes, some players will benefit from having more of their shots shown. Those same players, in normal times, typically have bigger galleries, and are therefore less likely to lose a ball. Also, a rules infraction by those players is also more likely to be seen by fans or by a trained camera. Sometimes you win, sometimes you lose.

Those players — Arnold Palmer in 1960, Jack Nicklaus in 1980, Tiger Woods in 2000 — also bring in paying fans, drive up TV ratings, help make professional golf viable in the first place. You can’t pick-and-choose in these matters. In golf, as in life, you’re responsible for what you know. If you see something, say something. SkySports cameras and camera operators are not excluded. Ditto for those from Golf Channel, NBC Sports, CBS Sports, ESPN, and all the rest.