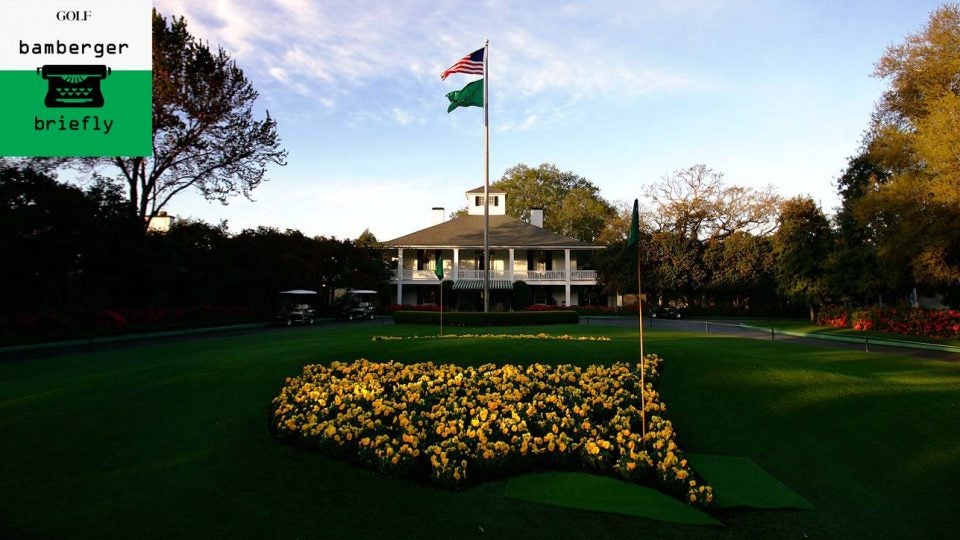 Augusta National is sure to play different in the fall.
Getty Images

Ed. note: Well, Big Jack still has the record on a solo basis! Tiger Woods will have to wait until November to try to match Nicklaus’s six Masters titles. This week, Bamberger, Briefly comprises a series of five short pieces in which the 18-time major champion opines on this and that. Monday: Golf with Peyton Manning. Tuesday: Life with Barbara. Today: Augusta in November.

Augusta National is a seasonal club, open for play from October to May. Earlier this month, Fred Ridley, the club chairman, announced that the club plans to put on the postponed 2020 Masters from Nov. 12-15. Jack Nicklaus, the six-time Masters winner, is also an Augusta National member. He has played the course in November, so I asked him what we, fans and players both, could expect. Here’s his response, with modest editing. Nicklaus doesn’t need much editing.

“I try to stay away from Augusta in November, because of the overseed,” Nicklaus said. “The fairways are never good then. But they’ll figure that out. They’re going to have to figure out how to get the overseed in and get it cut short and get it crisp so they can play golf shots. That would be the most difficult thing to have in November. I think they’ll try to dry up the fairways. I think the golf course will play relatively short in November.

Celebrities
I had lunch with David Feherty. Here are 5 epic (and hilarious) stories he told

“I’m in favor of trying to get everything in. I talked with Fred [Ridley]. I give him credit. They worked with all the golf associations and with the Tour and figured out a way to come up with a schedule. I think they’ve got a pretty darn good schedule. It’s sort of condensed, but if this virus settles down and they’re allowed to go play, they’ll still have a good season.”

Some notes on Nicklaus’s comments:

The schedule. Nicklaus expects his own tournament, the Memorial, originally scheduled for June 4-7, to be played from July 16-19, the dates that had originally been reserved for the British Open, which will not be played this year.

Football in November, as it relates to Jack. On Saturday, Nov. 14, Ohio State is scheduled to play at Maryland. Nicklaus, you may know, is a Buckeye.

Michael Bamberger welcomes your comments or suggestions at Michael_Bamberger@GOLF.com.