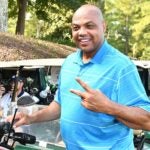 Charles Barkley was part of the announce team for The Match: Champions for Charity.

Seconds before Tom Brady hit his fourth shot on the seventh hole at Medalist Golf Club on Sunday, all he could hear was Charles Barkley. Each of the four competitors at The Match: Champions for Charity – Brady, Tiger Woods, Phil Mickelson and Peyton Manning – were wearing microphones and earpieces, and Barkley, one of the announcers, had been talking directly with Brady, the player who, to that point, had been struggling the most.

“Hey, Tom, how many shots you want? I’m going to give you some shots,” Barkley said. “I want some of you.”

Seconds later, Brady holed out. Birdie. And all Barkley could hear was Brady.

“Take a suck on that, Chuck,” Brady said as Barkley laughs. “Chuck, Chuck, Chuck, shut your mouth, Chuck. Take a little of that medicine.

“Get your butt out here.”

Barkley would play in the third Match if he’s asked, he told The Dan Patrick Show this week. (And it sounds like there might be at least a third Match.) And if you thought Barkley’s candor was good Sunday …

“Listen, as long as I can drink and smoke when I play golf, I’m good,” he said on the Patrick show. “I’m going to have some drinks and some stogies. I’m not going to be overly concerned about how good or bad I play. I mean, I don’t think Tom Brady lost a lot of sleep because he was struggling on the front nine.”

You could mic-up Barkley, too. Sunday’s broadcast, along with the previous week’s made-for-TV charity event, TaylorMade Driving Relief, was one of the few times where golfers’ conversations were aired live, whether it be private thoughts or talk between teammates, between teams or between golfer and announcer. It added to the broadcast, Barkley said.

It should also be added to PGA Tour broadcasts. The Tour resumes play on June 11 after its coronavirus hiatus, and for at least the first four weeks, there will be no fans. Without galleries, Barkley said more than the announcers should talk.

“I thought the key to the whole thing was how relaxed the players were and how much fun they had,” Barkley told the Patrick show. “If I’m the PGA Tour – this is my piece of advice to them – if we’re not going to have fans, they should mic the players. I really believe that. That’s just my two cents for the PGA Tour. I really think they should consider if you’re not going to have fans, you can’t just have guys playing golf and announcers talking.”

Barkley offered another innovation for broadcasts.

Somewhere between the time Brady holed his shot and picked his ball out of the cup, he split the backside of his pants. Barkley said he noticed when Brady bent over, and Brady eventually changed into a pair of rain pants.

Or maybe he shouldn’t have changed.

“I think he should have kept playing with his pants like that to keep the female viewership up,” Barkley said on the Patrick show.