Tom Brady struggled mightily early in The Match, and Twitter roasted him 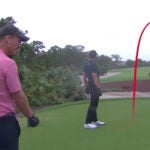 The early part of Tom Brady's round was rough going.

The much-anticipated Match II kicked off after a short rain delay on Sunday at Medalist Golf Club in Hobe Sound, Fla. Tiger Woods and Peyton Manning vs. Phil Mickelson and Tom Brady teed off around 4 p.m. and battled heavy rains right away.

Brady, the six-time Super Bowl champion, has also battled something else: his own game.

Brady missed the fairway on the par-4 opener and made a bogey, and later on the green he had to figure out how many strokes he had taken (looking like every weekend hacker).

On the 2nd hole, he missed the fairway way right but avoided serious trouble. Not so much at the 3rd, when he hit one out of bounds and then chunked a chip by the green. He missed his putt for a 7 and then picked up. Brady felt a lot better when he got to the 4th tee box.

“It’s a miracle that I have a shot from the grass,” he told on-course reporter Amanda Balinois when he stepped to the tee box on the 4th, a par-3.

Analyst Charles Barkley got in on the action after that, telling Brady he’d give him $50,000 to donate to his charity if he hit the green on the 4th. Brady missed well left.

“I should have just said keep it on the planet,” Barkley said.

Brady, who is listed as an 8.1 handicap, then chunked his next shot, and on 5 he hit into the hazard. The Twitter world has had fun with Brady’s rough start. (Follow along with the action here.)

(UPDATE! Brady being Brady holed out at the 7th hole to snap his slump.)