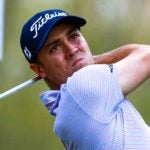 Justin Thomas will be one of the announcers for The Match: Champions for Charity.

He’s scoring as well as he ever has.

One day after he was posing on Instagram with actress Kathryn Newton for Polo Golf, and hours after his likeness was placed on the cover of the new “PGA Tour 2K21” video game, Thomas was named Thursday as one of the on-course commentators for The Match: Champions for Charity, the fundraising golf event between the team of Tiger Woods and Peyton Manning, and the team of Phil Mickelson and Tom Brady.

Thomas should know how to hit most any kind of shot at the site of the May 24 event, Medalist Golf Club in Florida.

Earlier in May, he and fellow PGA Tour golfer Rickie Fowler played the course using persimmon woods and balata golf balls in a throwback round. In 2018, Thomas hit a shot from a muddy lie – without a shirt. He’s also a member.

Another analyst of the event should know about playing for money.

Charles Barkley will join Thomas, along with Trevor Immelman, Amanda Balionis and Brian Anderson, as part of the coverage for the 3 p.m. event on TNT. Earlier this month on GOLF.com’s Subpar podcast, Barkley said fellow NBA great Michael Jordan once told him he could pick up a putt that was worth $1,000. Why? Jordan didn’t want Barkley in his line for his $100,000 roll.