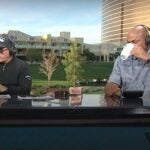 Phil Mickelson and Charles Barkley break down the action during the Koepka vs. DeChambeau match on Friday.

On Friday afternoon it was Brooks Koepka vs. Bryson DeChambeau in Las Vegas, and a couple of hours after it started it was Koepka who walked away with an easy 5-and-3 win.

But the two other winners? Charles Barkley and Phil Mickelson. Sir Charles and Phil were stars of the broadcast, offering their quick analysis and even quicker wit. They added some much-needed energy to a match that lacked big-time shot-making or effortless player commentary. It also helped they could communicate directly with players through earpieces.

Luckily for you, we compiled the best Mickelson and Barkley moments of The Match. Check them out below.

‘I have no problem cheating; I’m not gonna lie’

You have to appreciate Barkley’s honesty here.

‘You can still hear me?’

In what should be a surprise to no one, Mickelson enjoyed talking, but on one hole he might have enjoyed it a little too much.

DeChambeau was in the green-side bunker on the 1st hole, and Mickelson was breaking down DeChambeau’s bunker game as DeChambeau stood over the ball. He took several practice swings, backed off and seemed to be taking his sweet time with the shot. Why? Because Mickelson wouldn’t stop talking.

“This is in a spot that’s really tough,” Mickelson said. “Even though it’s a slight uphill lie he has a chance, but because the green goes away it’s difficult with his wedges he has because all of his clubs are very upright, because it’s very hard to slide this club underneath and create a high shot. Where he’s really good are the basic shots, but the ones where he has to get really high and soft are more difficult. I think a really good shot for him would be six to eight feet feet past the hole—”

What’s harder than hitting a tricky bunker shot on live TV? Having Phil Mickelson analyze it and talk about why you might struggle immediately before you hit it.

“Oh, you can still hear me?” Mickelson said.

Luckily for Bryson, he got up and down for par and tied the hole.

‘You two are dangerous together’

Mickelson and DeChambeau are two of the game’s deep and technical thinkers, so they can get into some compelling conversations. On the 7th hole, Mickelson asked DeChambeau a question about his thought process and getting his mind right to play. Bryson, in a lengthy and thoughtful response, touched on frequency movement, brain waves and mindsets of supreme focus and clarity.

“Yo man, I’m telling you, I gotta keep you two apart,” Barkley said. “You two are dangerous together. Seriously, what does all that mean? I’m being honest.”

DeChambeau explained further, and Barkley seemed to grasp it a litter better, saying….

Sure! A little like yoga. But here’s Barkley’s great explanation, transcribed by my co-worker Dylan Dethier:

‘I need that liquid lube’

Mickelson asked Barkley if he reads putts better or worse after a few visits to the beverage cart.

“I need that lube. I need that liquid lube,” Barkley said. “I have a couple cigars and have me a couple alcoholic beverages. Listen, you can’t play golf and not drink. It’s the only sport they let you drink while you are playing it. There’s a reason why: it’s the most unbeatable game in the world.”

Why could Barkley only donate $25,000 to charity if DeChambeau hit the fairway on the long-drive hole? Well, because Nebraska was up big and eventually lost 28-21 to Iowa.

He was kidding. We think.

“I wanna say one last thing,” Barkley said later in the broadcast, seconds before the production signed off. “Thank you, Nebraska.”

It dripped of sarcasm. OK, maybe he wasn’t kidding.

Kind of. That’s the question Barkley asked after DeChambeau conceded Koepka’s putt on the 9th, giving Brooks a 5-and-3 win with a couple of challenges, three holes and about an hour of air time remaining.

“So are we done?” Barkley asked as the players walked off the 9th green. “Oh, I was getting ready to tell them to crank up the plane so I can get to the Iron Bowl. I was gonna get out of here early y’all!”

Turns out Barkley had to stay as the players played on and raised lots of money for charity, but we’re guessing Sir Charles got to the Iron Bowl just fine.

‘I wanna be dead broke’

Barkley mentioned how lovely the view was at the par-3 18th finisher, and Mickelson asked if that was because you could see the casinos in the background.

He was kidding. We think.