What Peyton Manning is unbeatable at, former teammates and coach say 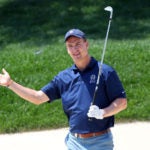 Peyton Manning is "steady" on the golfer course, according to a former teammate.

Medalist Golf Club has trees, sand traps and water, places where a player could find themselves receiving some heat.

“Probably everything he was in football he is in golf, but with more stories – good stories, really good stories,” former teammate Brandon Stokley said to ESPN.

Said former coach Mike Shanahan to ESPN: “He talks smack to everybody, especially if you act a little cocky or like you’ve got it all figured out. But he’s a fun guy, a lot of back and forth in between holes maybe or after, but he’s competing for every second, every shot. But if they get into talking in this one, I would expect him to give more than he gets with those guys.”

Expect Manning to hit more good shots than bad, too.

Welker told ESPN that Manning is a “steady Eddie,” shooting in the high 70s and low 80s and never making a triple. Stokley told ESPN he’s played “hundreds” of rounds with Manning. Or more play against. Manning plays to win.

“I just always expect him to make a big play on the course, that’s my mentality when you’re playing him,” he said. “ … I never want to be surprised – he’s going to make a 50-footer, or he’s going to chip in.”

And then he’ll let you know about it.

During the round. Or even after.

“We keep it respectful, but after the fact, we will send a text message or two to rub it in a little,” Stokley told ESPN.