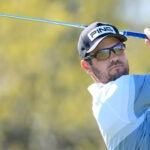 Corey Conners hit his tee shot on Friday on the 7th hole at Bay Hill.

One of the contenders has finished first, tied for 31st, tied for second, tied for sixth, tied for fifth and tied for second since last December. Six events, five top sixes. Guess where he’s at the midway point of the Arnold Palmer Invitational? (Hint: It’s not tied for 31st.) Here are three things you need to know after Friday’s second round at Bay Hill in Orlando, Fla.

Corey Conners eagled the par-5 16th during the first round. Guess what he did during the second round?

Conners hit his drive down the right side of the fairway, hit his approach to 23 feet and rolled in the putt. One hole, two eagles, four under. He finished with a three-under 69 and a one-shot lead over Martin Laird.

“It was really solid today,” Conners said. “I didn’t hit as many shots close to the hole as I did yesterday, to give myself as many birdie chances, but I was really happy with how I grinded out a bunch of pars today. I was in some tricky spots and, yeah, overall really solid day and nice to finish off with a strong back nine.”

Laird, who won the Arnold Palmer in 2011, made four birdies and an eagle for a 67, tied for the day’s second-best round.

“I played really nicely today,” Laird said. “It was getting a little baked out out there around the hole those last few holes, but very pleased. I drove the ball excellently yesterday, and with the rough we got here this week, you need to do that. If anything, I think I maybe even drove it a little better today. That’s kind of the important thing around here right now, getting the ball in the fairway. So I’ve been doing that for a couple days and hopefully it can continue.”

Viktor Hovland and Rory McIlroy are two back

Viktor Hovland shot a four-under 68 and is tied for third, a spot on the leaderboard he’s been around just about all year. He was one under through 14 holes, then birdied three of his last four holes.

“Obviously playing very good, and I don’t feel like I have that many holes in my game anymore, which is cool, because I missed plenty of greens out there today and I still shot 68, even made a bunker shot and got some really cool up-and-downs, which, walking from the fairway over to the rough wherever I was hitting from, after missing the green, I would have been anxious the whole way just walking up to the green,” Hovland said. “But now it’s like, all right, I’ll be all right, even if I make a bogey here, I can birdie the next. So it’s just a very relaxed kind of attitude.”

Rory McIlroy and Lanto Griffin are tied with Hovland. Three shots back of the leader is Bryson DeChambeau, and Jordan Spieth, Justin Rose, Sungjae Im and Paul Casey are four behind.

Among other players, defending champion Tyrrell Hatton birdied four of his last five holes and is nine back of Conners, and Rickie Fowler made the cut by a stroke.

Missing the cut were Patrick Reed and Billy Horschel, who tied for second last week. Robert Gamez, who won this event in 1990, shot a front-nine 47 and a back-nine 45 for a 20-over 92 — then was disqualified for failing to sign his scorecard.