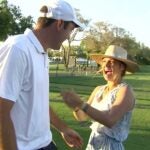 Scottie Scheffler and his wife, Meredith, celebrate after he won the Arnold Palmer Invitational on Sunday at Bay Hill.

Scottie Scheffler was on live TV and about to talk about how tough a test Bay Hill was over the past four days. But first, he had to take a quick break and embrace his wife, Meredith, who blitzed onto the scene to celebrate her husband’s second win in his last three starts.

To recap: Scheffler had just signed for his even-par 72, and after Billy Horschel missed a birdie putt on the 18th hole, it was good enough for a one-stroke win at the Arnold Palmer Invitational on Sunday. Scheffler had just started an interview with NBC Golf’s Kathryn Tappen, but Tappen’s second question was interrupted. She was trying to ask Scheffler how challenging the week had been, but before she could finish, Scheffler smiled, stared off screen and was soon greeted by Meredith.

Meredith also informed Scheffler that his grandma and parents were there for it all. (His grandma, who will be 87 next week, walked all 18 holes on Sunday.) Whether or not Meredith knew she was on TV is unknown. Whether she cared, also unknown. But who can blame her? The guy just won $2.16 million.

Scheffler eventually returned to answer one final question before he resumed the celebration.

“Meredith obviously knows me better than anybody, being my wife,” Scheffler said later in his press conference. “She knows how hard it is when I don’t win. So being able to celebrate a win is pretty special, and to have my parents here for this one is extremely cool with all the sacrifices they made growing up. I’m just really pleased.”

As the broadcast was signing off for the night, the cameras showed Scheffler and Meredith walking through a parking lot, en route to one of their post-win obligations. Meredith was still pumped.

“Well, Meredith is certainly excited, and why not?” said Dan Hicks. “Her husband has arrived, big time, on the PGA Tour.”

Horschel, and the rest of the family, got in on the celebration later.