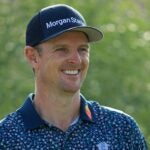 Justin Rose has one of the prettiest swings on the PGA Tour.

Every professional golfer has a swing that most recreational players would die for, but some swings stand out more than the rest. Adam Scott is a name that always comes to mind, as well as the silky move of Louis Oosthuizen. Former U.S. Open champion Justin Rose sticks out, too.

Rose has been a capable ball striker throughout his career, and even ventured into elite territory from 2012 through 2015 as he ranked inside the top 10 on the PGA Tour in SG: Approach the Green each year. During that stretch, Rose won at least once every year including a World Golf Championship in 2012, and the U.S. Open in 2013.

His swing is classic in terms of the positions he gets to throughout his move. There aren’t too many distinguishing factors that make Rose’s swing unique (in golf, that is a very good thing), as he makes a textbook delivery of the clubhead to the ball.

Rose’s effortless swing is one that every recreational player can learn from. Even if you don’t have the ability of the 10-time Tour winner, you can still mimic his technique for better ball striking.

From watching Rose’s swing, something that probably sticks out is his fluid tempo and the connectedness he displays. He never gets in a rush, and all parts of his body seem to be working together. This is no coincidence, and it has to do with a phrase he leans on when focusing on the fundamentals of his swing.

Rose’s tempo key: ‘Develop it to the top’

“One that’s super simple and always resonates with me is ‘Develop it all the way to the top,’” Rose told GOLF.com. “It’s a rhythm thing, but it’s also a sequence thing.”

He explained that when he “develops it to the top,” his entire body (and by extension, the club) is in perfect sequence. No one part of his body is ahead of any of the others, and as a result, he has a smooth tempo to his swing.

Rose made the analogy that a steady backswing is like coiling a spring. No matter if you coil it slowly or quickly, the same amount of resistance will be built up. Getting in a hurry and throwing things out of sequence does no good.

In the era of Bryson DeChambeau creating power with a violent takeaway, this advice might not resonate with some. But if you can’t create consistent contact, power will do you little good.

“A lot of people take the club back too quickly and that puts them out of sequence, and they can never land the club properly on the back of the ball,” Rose continued. “Develop your backswing all the way to the top as slow and smoothly as you can.”