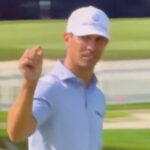 Billy Horschel gets into it with a fan on Thursday on the 9th green at Bay Hill.

Billy Horschel hit his birdie putt on the 492-yard, par-4 9th at Bay Hill, and about 8 feet short of its 35-foot trip, it began to break right. Almost instantaneously as it did, a fan yelled out, “Get in the hole.” About 5,000 fans were allowed into Thursday’s first round of the Arnold Palmer Invitational, one of the first tournaments over the past year to have a gallery due to the pandemic, and with them came the cheers.

And not just from the crowd.

As Horschel walked up to his ball, someone behind him shouted, “Bad read, Billy.”

Horschel turned around and briefly looked into the gallery, then tapped in and began walking off the green. His head lifted up.

“There’s a reason why I’m on that side of the ropes, and you’re on that side,” Horschel said. “I think my talent level is just a touch better.”

Horschel squeezed his right thumb and index finger together to emphasize his last point. He turned away and continued walking, then turned back and smiled before handing his putter to his caddie.

A week ago, during the World Golf Championships-Workday Championship, about 500 fans watched at The Concession Golf Club, and Horschel said he “started feeling that juice.”

What’s the best he’s given back?

“Oh, I think one — there’s been many of them,” Horschel said last week. “I think the one that I can remember the most was Scottsdale a couple years ago, a guy was yelling at me from on the hill after I hit my tee shot on 13 tee and he’s with his buddies and he said, ‘Hey, Billy, unblock me on Twitter, unblock me, come on, Billy, unblock me,’ and I just responded back with, ‘You shouldn’t have been a dumb a–, so sorry, you’re not getting unblocked.’ All his buddies just laughed and cracked up about it.”

And what’s the best he’s heard?

“There’s been a lot that I just can’t come back with,” Horschel said last week. “They get me, I’m like, ‘Hey, you’ve got me, I got nothing to come back.’ It probably has to do with something with the Ralph Lauren pants I’ve worn in the past years because some of them are, let me just say, they’ve been out there a little bit. But there’s just some that they say something about them and I’ve got nothing in return. I give them a thumbs-up, say you got me.”