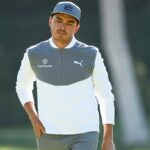 Fowler is trying to play his way into another Masters appearance.

Golf is a game of ups and downs. Progress is rarely linear, and improvement can seem impossible when you are in a slump. It’s true for everyone from beginners all the way to the pros.

One of the pros currently in the throes of a slump is Rickie Fowler. Once a top-five player in the world, Fowler has slid all the way to 65th in the Official World Golf Ranking. Since his last win at the 2019 Waste Management Phoenix Open, the 32-year-old has more missed cuts (12) than top 10s (eight).

“It’s very frustrating,” Fowler said ahead of the Arnold Palmer Invitational. “It’s made it at times tough between Joe [Skovron] and I on the course. We have a great relationship, we have known each other for a long time, but when I’m out there and I’m not hitting shots that I’m visualizing and seeing, it’s hard.”

He added that the struggles have been “tough for all of us that are involved, from my caddie, to my wife, she’s having to deal with me at home.”

The slump also has Fowler in a spot he’s not familiar with — sitting out of the Masters. If it were to start today, he would be left out of the field as just the top 50 players in the world receive guaranteed spots. Fowler has not missed the Masters since 2010.

If Fowler hopes to extend his streak of 42 straight starts in a major, he’ll need to kick it into gear soon. With the Masters just over a month away, catapulting into the top 50 seems like an unlikely feat. The only other way he can secure his spot in the field is by notching a win between now and then.

The good news on that front is of the five tournaments between now and the Masters, two of them are events Fowler has won in the past (Players Championship and Honda Classic). If there was ever a time to summon some of that old magic, now would be a great time to start.

“It’s golf,” Fowler said. “Everyone that’s played really at all, especially at some sort of a high level completely understands that golf is up-and-down. … Unfortunately, this one’s been a little longer than I would like it to have been, but we’re grinding through it.”