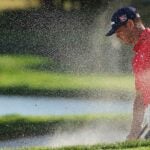 Gary Woodland on Sunday after a shot from the bunker on the 17th hole at Bay Hill.

The tee shot on 17 felt good. The shot from the sand on 17 was hit the way he wanted to hit it. The putt on 18 looked like it was rolling in.

And that was how close Gary Woodland believed he was to being your 2022 Arnold Palmer Invitational champion. And how he finished tied for fifth instead.

“I’m glad I’m off that golf course,” he said after Sunday’s final round. “I’m glad I’m done. That’s where I’ll start. I’ll take the positive from that.”

If he sounded exhausted, it’s because he was. And understandably so. He had gone four rounds and 72 holes with a bruiser named Bay Hill. And the biggest blows came at the bell. He landed the first. On the par-5 16th, which he started one shot out of the lead, Woodland hit a drive into the dirt area right of the fairway, then hit two of the best shots of the tournament — a bullet out of the dirt that dropped 24 feet from the hole, and the ensuing eagle putt that he sunk — and he led by one with two holes to go.

From there, his scorecard reads this way — double bogey on the par-3 17th, bogey on the par-4 18th. Only he struggled to think of what he may have done differently. Golf happened. On the 17th, he hit a cut 8-iron off the tee, the wind slightly hung up his ball, and it splashed in the bunker, 5 yards short from maybe being perfect. On the second shot, needing to plop his ball just onto the green, his hands slightly decelerated, and the ball fell a couple yards short of where he wanted it to go, and it stayed in the sand.

One shot out of the bunker, and two putts later, he was out of the lead for good.

“I felt good about 17,” the 2019 U.S. Open champion said. “It was a good number. I tried to hit a cut in there and just got eaten up by the wind. A little unfortunate with the lie. The lie came out of the pitch mark, but it was still plugged a little bit. So I tried to chunk it, and I chunked it, chunked it too much.

“Frustrating. I played a lot better than the score showed. I can take a lot of positives, but it stings right now.”

On 18, after a drive into the thick left rough, a punch-out short of the water and a chip on, he slid an 11-foot putt for par just to the left. Had Woodland made it, he would have joined a group at four-under, one shot back of eventual winner Scottie Scheffler, who was in the group behind.

“I did,” Woodland said when asked if he thought the putt was good. “I thought I made a lot today that didn’t go in. Feel good on the putter, which is nice. Will tighten up the driving a little bit, but all in all, I’m doing the right things.”

Indeed. While a blow, the tie for fifth was his second in as many weeks — which followed a seven-tournament stretch this year where he missed five cuts. He’ll head to next week’s Players Championship in search of his first win since his Open victory.