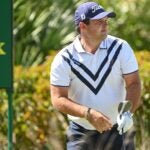 How does Patrick Reed block out distractions?

BRADENTON, Fla. — Patrick Reed was hovering near the lead at the Concession on Friday when he pulled 3-wood, hoping to get down around the par-5 3rd hole in two shots. Then he hit one of the more confounding shots of the day: a cold top that barely left the ground and traveled just over 100 yards before finding a bunker.

It’s easy to imagine that rattling a player with lesser mental fortitude. But however you may feel about Reed, there’s no denying his ability to block out the noise. That was true in his last start, when he brushed aside a Saturday “embedded ball” firestorm to dominate the field on Sunday. It was true when he won this event last year — when it was in Mexico — capping off a defiant run in the aftermath of incidents at the Hero World Challenge and the Presidents Cup.

So it hardly should have been surprising that Reed, unfazed, followed that cold top by stuffing a mid-iron from the fairway bunker to three feet. He grinned to his caddie, Kessler Karain.

“We laid up to the perfect number,” he said.

After the round, Reed said that he’d actually made proper contact, but because of forward shaft lean and the style of knockdown shot he was trying to hit, the ball just hadn’t gotten high enough off the ground.

“I actually hit that ball on the center of the face and it had to have just literally hit right in the ground in front and it went forward,” he said. Whether that’s true or just an effective coping mechanism doesn’t much seem to matter.

How does Reed do it? How does he harness whatever emotions he might be feeling and channel them into his golf game? Earlier this week, he did his best to explain what he’s feeling when he’s winning — and how that’s different from when he doesn’t win.

“There are times throughout golf you kind of get tunnel vision, and everything seems to just kind of flow,” he said. “Then there’s times, obviously you have the ups and downs of golf, where you start hitting some loose shots. And it seems like the times you win, you get kind of those 50/50 balls.”

Reed is famous for fist-pumping, gritting his teeth and playing off the crowd. So it’s interesting that despite how it might look, he’s focused on staying level over the course of his round. The best tournaments, he said, are “those weeks where you’re able to kind of mentally forget the good runs — but also forget the bad runs. You’re able to kind of stay in the moment.”

When some guys play their way into the lead, Reed said, they start thinking and playing differently. That’s a big mistake.

“Sometimes you get too caught up in the moment and push too hard in certain areas to save that lead rather than do what got you to that point, which is, ‘put your head down and grind and go ahead and attack the golf course on your strategy,'” he said.

The gist of his advice — take things one shot at a time — is as old as the sport itself. But Reed has a body of work to suggest he’s successfully put it into practice.

“There’s a good bit of times guys will make a heck of a birdie on a hole and they’ll follow it up with a bogey because they get too hyped up and they’ll get too focused on what happened in the past,” he said. “You should be always trying to stay in the present. I’ve been a firm believer of that in golf that you should try to focus on every single shot that you have then and there, not what shots are coming up. You never get ahead of yourself.”

You can glean certain bits of information from shots you hit during your round, Reed said, like an 8-iron going a certain distance with a particular wind.

“But you’re not sitting there either being really excited about the four birdies you just had or being disappointed and down on yourself because you made a silly bogey or a double or a couple bogeys here or there,” he said. “You always have to seem to stay in the present and forget about the good things and also bad things so you can basically put all your energy in each shot you’re hitting.”

Reed made three birdies in a row midway through Friday’s round to charge into the lead. But then he hit two balls in the water in his final five holes, what he called “a couple head-scratchers.” That left him three shots off the lead heading to Saturday’s round, very much in the mix. He said he has one goal heading to the weekend: reset.

And then keep resetting after every shot that follows.