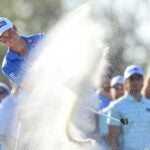 Viktor Hovland blasting out of a bunker on a challenging Sunday at Bay Hill.

Check in every week for the unfiltered opinions of our writers and editors as they break down the hottest topics in the sport, and join the conversation by tweeting us @golf_com. This week, we break down the carnage at the Arnold Palmer Invitational, Jin Young Ko’s domination, the upcoming Players Championship and more.

1. The best in the world melted down at Bay Hill this weekend. Thick rough, high winds and speedy greens across an already testing layout befuddled the pros, with Scottie Scheffler coming out on top — surviving? — with a five-under total. While it’s a break from the birdie bonanza from earlier this year, do you think the course bordered on the unfair?

Michael Bamberger, senior writer: No, it’s fair. You can’t have the rough deeper, but it’s fair. With the wind up and the sun out, it is bound to play super hard. There’s nothing wrong with that. No matter what they shoot, they’re still eating cake.

Josh Sens, senior writer (@JoshSens): It wasn’t just fair, it was also entertaining, a refreshing break from those 20-under birdie fests we see plenty of already.

Dylan Dethier, senior writer (@dylan_dethier): Variety is the spice of life! I wouldn’t say they melted down. I’d say they battled a difficult golf course in difficult conditions. The players are allowed to be frustrated. I’m also allowed to enjoy it. Hard golf makes for prime viewing.

Josh Berhow, managing editor (@Josh_Berhow): Not unfair. The wind is always a wild card. These guys are the best in the world and don’t particularly enjoy shooting high scores, so when courses and conditions bite back, you hear some of them get a little more defensive. I don’t want 18 under winning every week. I’m good with gritty pars winning golf tournaments.

2. Jin Young Ko continued one of the more impressive runs in recent history. In winning the HSBC Women’s World Championship on Sunday, she has now finished atop the leaderboard six times in her past 10 events, and in shooting 66, she has now shot 15 consecutive rounds in the 60s and 30 straight rounds under par. In short, she’s on fire. How do you see her season playing out? How many wins will she have at year’s end?

Bamberger: How many tournaments will she play? She looks like she’ll literally contend every time she plays. It’s happened before in women’s golf. It’s impossible to sustain, but it’s fun while it lasts.

Sens: Remember when Yani Tseng was never going to lose again? Michael’s right. It has happened and best to enjoy it for what it is rather than worry about what might be coming. That said, she’ll win two majors this year.

Dethier: Six? Eight? Who knows. As Sens lays out, let’s appreciate this for what it is. Ko almost never misses a green in regulation. She almost never makes bogey. She almost never shoots an over-par round. It’s going to make the Chevron all that much more exciting when she and Nelly Korda next tee it up in the same field.

Berhow: She won five last year, and it seems like she’s going to get at least that again this season. I hope she goes on a tear and threatens double digits, but I also hope another big-time star (Nelly Korda?) can have some good battles with her to give the sport a nice juicy rivalry at the top.

3. Tiger Woods, the PGA Tour announced, won the first Player Impact Program, an initiative that measures, among other metrics, a player’s buzz. Notably, Woods may have also won next year’s PIP when he humorously responded to an earlier tweet from Phil Mickelson, who had declared himself the winner. With one year of the program in the books, how would you rate its success? Would you change anything?

Bamberger: I’d eliminate it. I’d say the results show it is a ridiculous contest or whatever you want to call it.

Sens: I’m for scrapping it as well. But then, I think it would be a net gain for the world to get rid of social media altogether, so I’m biased. If you have to keep it, just give it to Max Homa and be done with it.

Dethier: Look, it doesn’t do me any good, so I don’t much care about the future of the PIP. But its purpose was essentially to keep the top pros on the PGA Tour a little bit happier at year’s end — essentially a prize pool in lieu of appearance fees or guaranteed money. From a competitive standpoint, it serves no purpose. But from an organizational standpoint, I get it. As much as anyone can “get” those rankings and final standings, at least …

Berhow: It’s really a bizarre thing. Here they talked about something called Q-rating and MVP index and then Google search and this and that, and really what it means is that they just unloaded millions of dollars to most of the players you thought would get it anyway. I don’t know — I get the idea was to keep the stars who bring eyeballs to the game happy, but there’s gotta be better, more genuine, ideas than this. I don’t have one, though, so maybe there isn’t.

4. Following Woods and Mickelson in the PIP standings were Rory McIlroy, Jordan Spieth, Bryson DeChambeau, Justin Thomas, Dustin Johnson, Brooks Koepka, Jon Rahm and Bubba Watson. Among the notables who missed the top 10 — and the money — were Rickie Fowler, one of the more popular players on Tour, and Max Homa, one of the more social media friendly players. What, to you, is the biggest surprise from the PIP results?

Bamberger: That anybody cares about it at all. Except those who are cashing checks.

Sens: I don’t think it’s surprising at all that people care about it. But I am surprised that Homa didn’t get more love. He’s smart and funny. Isn’t that what this sort of thing should be about?

Dethier: At risk of sounding like a know-it-all, I’m not surprised by either of these things! I’m intrigued by the results and, despite Homa’s reign as emperor of Golf Twitter, that doesn’t change the fact that Twitter ain’t real life. I was, however, surprised that Rickie Fowler wasn’t on the list, given the nature of the criteria.

Berhow: Homa not registering in the top 10 was a reminder to me that Twitter is just one small corner of the internet.

5. Scheffler has now won twice in his past three starts, and he’s projected to leap Rory McIlroy and become the fifth-ranked player in the world. His hot streak has come at the right time, too, since the Players Championship begins this week and kicks off the heart of the Tour’s schedule — Players Championship, Masters in April, PGA Championship in May, U.S. Open in June and Open Championship in July. From what you’ve seen through the first half of the Tour season, who are you buying for the stretch run?

Sens: What, no Morikawa or Cantlay?

Dethier: We’ll discuss this on the next PGA Tour Stock Exchange podcast, so I don’t want to give too much away, but if we’re buying low, how about Brooks Koepka and Tony Finau?

Berhow: The guy you just mentioned, Scottie Scheffler! A rocking Ryder Cup, two wins in his past three starts, confidence galore and, now, proof he can win on the PGA Tour in both birdie-fests and U.S. Open-style grinds. Look out. Oh, and Morikawa.

6. Pat Perez, on this week’s episode of GOLF’s Subpar, said that Jon Rahm told him: “I’m not done until I win 19 majors … I’m not going to take off golf until I get to 19. Whether I do it or not doesn’t matter. But I am not quitting until I pass Tiger on that list.” To date, of course, Rahm has won one major. While we appreciate Rahm’s confidence, let’s make a prop bet — Rahm will win over/under six majors?

Bamberger: Based on the quote above, I’m taking the over. The way, way over.

Sens: Rahm will win multiple majors, but the talent pool is so deep and winning is so hard, six feels like a pretty good line. I’ll take the under.

Dethier: Under. Six is so many majors. He has played golf at a higher level than anyone else for a couple years in a row now and he has one. In golf, peaks are difficult to sustain. But I’d be delighted for Rahm to prove me wrong.