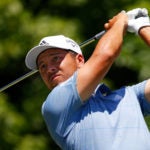 Xander Schauffele hits a shot on the eighth hole at Colonial Country Club on Saturday.

One player ranked in the world’s top 20 is in the lead. Several others in the top 20 are close. The PGA Tour has not played in three months due to the coronavirus hiatus, and it’s making up for lost time.

Here are three things you should know after Saturday’s third round of the Charles Schwab Challenge at Colonial Country Club.

Xander Schauffele didn’t have the outright lead for long, but he’ll have it overnight.

Jordan Spieth, who entered the day one shot out of the lead and played in the final pairing, had also been at 13-under until bogeying the 15th. He’s among five players one shot behind Schauffele, and among 13 players who are within three strokes of the lead.

Joining Spieth at 12-under are Justin Thomas, who shot a bogey-free 66; defending U.S. Open champion Gary Woodland, who birdied 17 and 18 to move up; Branden Grace, who’s shot three straight 66s; and Collin Morikawa, who made six birdies on Saturday, but also three bogeys.

Two players were at 11-under – second-round leader Harold Varner, who birdied the first, bogeyed the 14th and made 16 pars; and Daniel Berger, who a 3-under 67, his 26th straight round on the PGA Tour of par or better, the longest active streak on Tour.

At 10-under were world No. 1 Rory McIlroy; Bryson DeChambeau, who started the day a stroke out of the lead but shot an even-par 70 on Saturday; Patrick Reed, who shot the day’s low round with a 7-under 63; Justin Rose, the first-round co-leader with Varner; Abraham Ancer; and Corey Conners.

Patrick Reed teed off just over three hours before the final pairing. He’ll tee off a lot closer on Sunday.

Reed fired a 7-under 63, good for the day’s low round, and jumped him 26 spots up the leaderboard. He’s now at 10-under for the tournament and is tied for ninth, three shots behind leader Xander Schauffele.