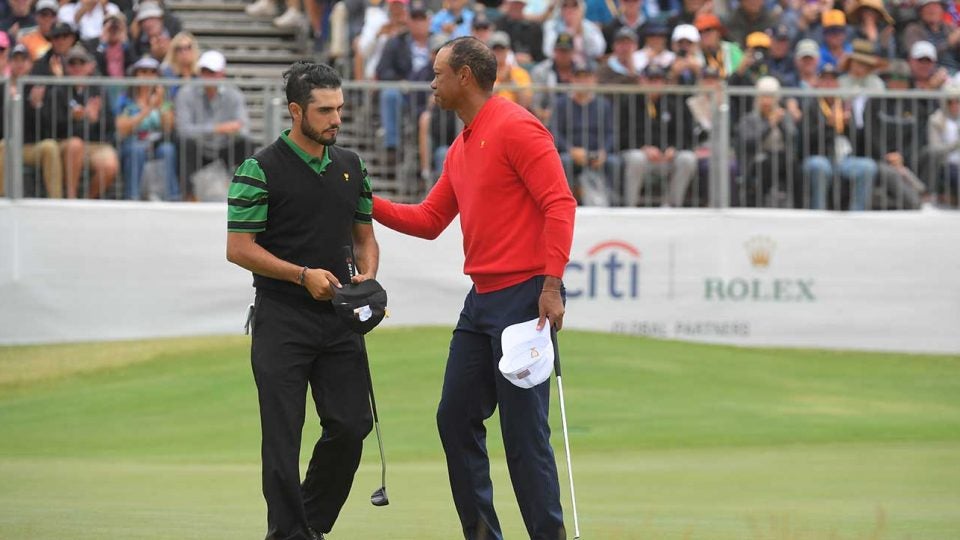 Take a few deep breaths, golf world, Abraham Ancer wasn’t ever coming after Tiger Woods. After finding himself on the receiving end of the wrath of both social media and Tiger, Abe Ancer cleared the air on his perceived controversy with Woods.

Ancer first found himself in hot water Saturday, when Woods bested him in their singles match at the final day of the Presidents Cup. After Woods’s 3 and 2 victory, fans quickly dug up Ancer’s comments from the Mayakoba Golf Classic.

“I would like to play against Tiger,” Ancer said at the time.

Abe Ancer: I want to play against Tiger

Woods quickly responded to Ancer’s comments after the round, saying, “Abe wanted it, he got it.”

“Abe wanted it and he got it.” Tiger doesn’t miss a thing. I mean, nothing gets by him.

Tiger said “Abe wanted it, and he got it.” Tiger is just a cold blooded killer lol pic.twitter.com/p1VDqxGTfy

But just as the twitter trolling was reaching its peak, Ancer stepped to the podium at the Presidents Cup and clarified his comments.

“When they asked me that at Mayakoba, first of all that question was in Spanish, so the tone when I said it, it was never like cocky or challenging or anything like that,” Ancer said. “At the moment I thought it would be a great experience, which it was. No matter what, with the outcome of the match, I would have gained a lot. I would have become a better player just from being in that situation.”

Heading into the final day at the Presidents Cup, Ancer had been one of the International team’s best players. He dominated the U.S. side throughout fourball and foursomes play en route to 3.5 points and a 3-0-1 record heading into his match with Tiger.

In International captain Ernie Els’ eyes, Ancer may have been a victim of his own early-week success.

“We didn’t plan it like that,” Els said. “As you remember, we had first pick and he was playing so well. We put Abraham’s name out and Tiger actually picked Abraham.”

After all that, it seems Ancer’s desire to play Tiger came not from a place of hubris but rather self-improvement. An outcome Ancer had hoped for but certainly hadn’t chosen.

A controversy that wasn’t in the aftermath of the U.S. team’s comeback win at the Presidents Cup.