2021 Mayakoba leaderboard: Who’s contending after round 3 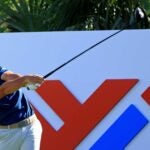 Viktor Hovland, last year’s winner at El Camaleon Golf Club, is defending a title for the first time in his young career this week. The crown fits. He’s only 18 holes away from potentially defending back-to-back titles for the first time. Here are three things you need to know after Saturday’s third round of the World Wide Technology Championship at Mayakoba in Riviera Maya, Mexico.

Perhaps no play encapsulated the Mayakoba king’s day more than his tee shot on the 17th. Tied for the lead, Hovland opted to hit driver rather than lay up with the tee pushed forward, hit just over the hole and to the right, pitched on and made birdie. On 18, he followed with another birdie, after an approach to about 5 feet.

The 3-3 finish gave Hovland a nine-birdie, no-bogey 62, a 19-under total and a two-stroke lead over Talor Gooch entering Sunday’s final round. Justin Thomas is three shots back, and Carlos Ortiz five.

“That was fun today,” Hovland said. “Obviously got off to a nice start, and it was nice to have one of those rounds where you can kind of keep it going throughout the day instead of maybe slowing down towards the end there where, frankly, there’s some tough holes.”

Making the tee shot on 17 even more noteworthy was that it came with James Hahn’s driver. On the range on Wednesday, Danny Lee broke Hovland’s gamer, Hahn lent Hovland a slightly shorter version, and he’s shot no worse than a 65 with it.

“Yeah, I just thought it was a good number,” Hovland said of his decision to hit driver on the penultimate hole. “With it being in and off the right, I felt like that gave me some leeway to kind of start it out towards the right, so away from the water on the left.

Two back of Hovland is Gooch, who had six birdies, an eagle and no bogeys in an eight-under 63. Three back is Thomas, who shot a seven-birdie, no-bogey 64. Thomas had been three-over for the tournament through 11 holes this week, then has made one bogey since.

“I’m very, very proud of myself to be where I’m at,” Thomas said. “It’s funny, I played with [Patrick] Cantlay the first two rounds of the BMW this year and he had a very similar start. He was off to a very, very sluggish start. He was hitting it really bad and scrambling for pars and bogeys, and on an extremely easy golf course like that, I think he was a couple over around the turn, and we all know what happened that week.”

Five back of Hovland is Ortiz, and Sergio Garcia and J.J. Spaun are six behind.

Entering Saturday, Matthew Wolff led by two over Scottie Scheffler. Neither broke 70. Wolff bogeyed his second and third holes and four in all, shot a three-over 74 and is now nine strokes back. Scheffler double-bogeyed the 14th after hitting his tee shot out of bounds, shot a 70 and is seven behind Hovland.

Among other players, Rickie Fowler shot a two-under 69 and is 13 shots out of the lead, and Patrick Reed shot a one-under 70 and is 14 strokes back.