Viktor Hovland is eyeing victory at the 2022 Open Championship.

By this time on Sunday afternoon, we may be witnessing the highest point of Viktor Hovland’s career so far. But you can’t fully appreciate the good without remembering the bad. And for Hovland, the lowest ebb of his career lives long in the memory.

It came during his first semester at Oklahoma State, when he made the trip across the pond only to find himself playing with the best college golfers in the country.

“I was really struggling,” Hovland said earlier this year, at the Players Championship. “I was hitting hitting really low slices off the tee. I couldn’t hit a 3-wood off the deck, I couldn’t get it airborne, it was so frustrating because I would watch my peers and they would just hit these high draws off of the ground onto the green on par-5s.”

The humble Hovland is probably selling himself slightly short. As all good competitors do, he made the tools he had work: He qualified for three college events that fall, finished in the top 20 of each, and shot three rounds in the 60s along the way.

Still, Hovland wasn’t where he wanted to be, and he knew it. Even when he turned pro in 2019, he saw areas he needed to improve. That drive to get better pushed him down a path that eventually led to meeting GOLF Top 100 Teacher Jeff Smith.

The pair joined forces in early 2020, and they’ve been on a rocket ship ever since: Hovland has won three times on the PGA Tour since then, twice more in Europe, made his first Ryder Cup team and risen as high to third in the OWGR.

Now, he’ll head into Sunday at St Andrews tied Rory McIlroy at 16 under, and eyeing his first major championship.

Together, Hovland and Smith have accomplished that rarest of feats in sports: Making a player who was already unquestionably good even better.

Here’s how they did it.

Viktor Hovland had always been a golf swing nerd, and had worked closely with Denny Lucas, along with a variety of others. It meant that by the time Hovland landed firmly in Smith’s stable, his swing was already in good shape. The task, Smith says, wasn’t overhauling. It was tweaking and refining what he already had.

“We haven’t made any drastic changes to his swing,” Smith says.

But they did address a lingering issue in Hovland’s game: His natural left-to-right shot shape that would occasionally curve too severely, which stemmed from his technique.

“His tendency was to aim too far right, shift his lead arm out in transition and hit big pull-fades,” Smith says. “We’ve worked to neutralize that move so he can work the ball both ways and hit more of a straight ball as his stock shot.”

Making those small, technical tweaks in his full swing allowed Hovland more versatility. His good shots flew straighter, and he had greater command when the time came to hit different shots.

That’s when Smith’s task became helping Hovland implement it. Doing that meant providing more structure to what, and how, Hovland would practice. Hovland’s routine had been so fluid before, there were times he wouldn’t even practice chipping or bunker shots before his round.

Under Smith, who strongly believes in the benefits of structured practice, that was about to change.

“There was an opportunity to get better with wedges, so we began doing Trackman wedge combines on Tuesdays [at tournaments],” he says.

Add to that some changes in his putting — we’ll get to those — and Hovland was suddenly practicing smarter; more intentionally and focused. He’d soon reap the benefits of his new approach.

3. Working on the wedges

In golf and life, you can’t take the good without the bad.

Hovland’s golf swing technique features a strong trail hand grip, and he holds off the clubface during his release. It means Hovland’s clubface doesn’t rotate as much as other players (Ping actually measured this, and found Hovland has one of the lowest clubface closure rates of any golfer they ever measured). More than anything else, it’s what gives him such remarkable powerful consistency from tee-to-green.

But those technical elements in his golf swing also show up in shorter shots around the green. While delofting and keeping the clubface very stable through impact has transformed him into an elite ball striker, those same elements will occasionally cause him to bring the leading edge more into play around the greens. It means he’ll tend to catch the ball heavy or thin with his wedges, especially from unforgiving lies like the dry turf at the Old Course this week.

Excelling around the greens for Hovland requires learning, and perfecting, an opposite technique than what feels natural to him.

“Around the greens we spent countless hours refining his chipping and bunker action,” Smith says. “We’ve worked to get the club face in a less closed position so he can play with more loft and spin, and utilize the bounce of his club” 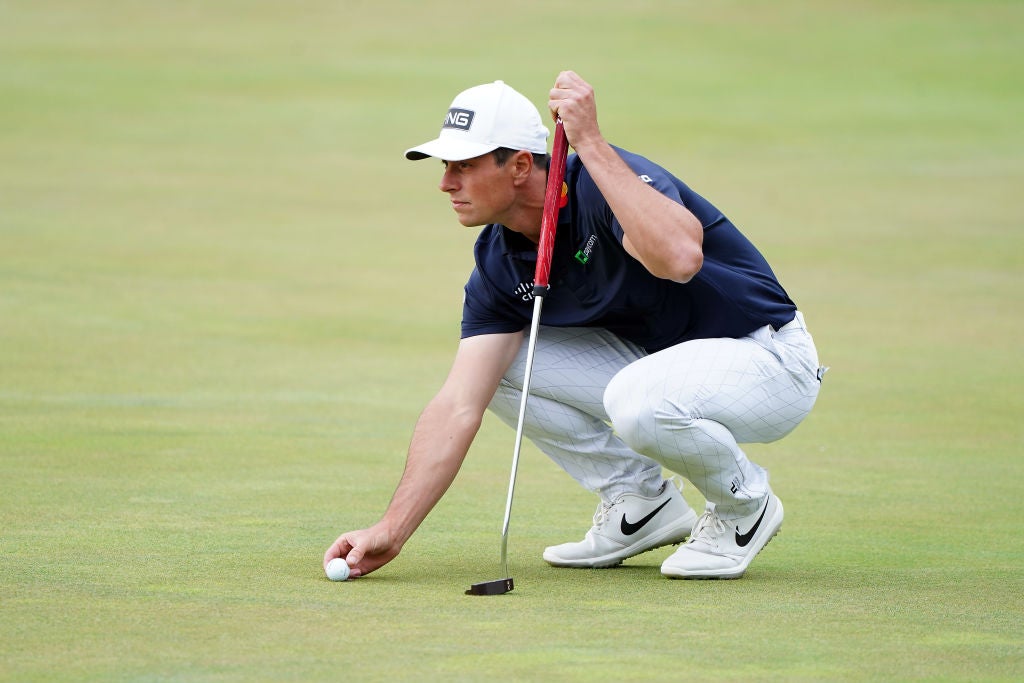 Viktor Hovland’s wedge may remain a work in progress, and his elite ball striking the clear strength of his game. But in some ways, his recent success has been fueled by his improved putting. Hovland has been quietly piecing together the best putting season of his career, thanks in large part to adopting the AimPoint green-reading method, suggested by Smith at the start of the year.

“He has always had a good stroke,” Smith adds. “He’s become one of the best green readers in the world.”

That, too, found its way into Hovland’s practice structure. During his putting warmups, Smith says Hovland will “calibrate” his putting by hitting 12 putts from all around the hole: four putts from each of five, seven, and nine feet. Hovland will read each putt using AimPoint, and then check the read using a level.

“It’s really given me a system,” Hovland said earlier this year. “It’s a system that doesn’t work every time, but it at least gives me a framework that’s a lot tighter.”

Doing the boring stuff behind the scenes, and getting a little better each day along the way. That’s how a good player like Hovland gets even better. And on Sunday, he may have a new trophy to show for it.