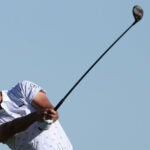 Rickie Fowler is in a tie for sixth heading into the weekend at the CJ Cup.

Rickie Fowler, when he was winning the Players Championship, and making Ryder Cup teams, and ranked in the top 10 in the world, would never be asked such a question. But this is the end of 2021, and he hasn’t won since January of 2019, and he not only didn’t make the Ryder Cup this year, but he missed out on the FedEx Cup playoffs for the first time in his career, and he’s now in the triple digits in the world ranking. So here we are, and here’s what he was asked after finishing Friday’s second round at the CJ Cup in Vegas in a tie for sixth:

“No, we’re in a position to go play a good one tomorrow to have a chance on Sunday,” Fowler said. “… Yes, the goal right now is to go win. I know I can play well on this golf course, I’ve proven that the first two days.”

In a position to play a good one tomorrow. I know I can play well. The goal right now is to go win. In the year of the comeback in golf (see: Fowler’s friend Jordan Spieth, along with a host of others), Fowler is sounding like Fowler again. Playing like it, too. Should he even tie for sixth, it would be his best finish since January of last year.

But like the man said, the goal isn’t sixth. Or fifth, fourth, third or second. Still, as he opened up about his struggles on Friday, Fowler admitted there have been times during this downturn where winning wasn’t primary.

“I mean, it crosses your mind,” he said. “Everyone’s gone through ups and downs in golf. When you’re in those low points, there’s times when you wonder like: Am I ever going to be back in that position? Obviously you believe that you can, but there’s those thoughts of like golf is obviously one of the most humbling sports there is and you can never take it for granted.

“So being in those positions, you know where you want to be, you know you can be there, you’ve been there before, but it seems like a long uphill battle. You know, like I said, it’s definitely been humbling, we’ve been patient, but it’s nice to see some stuff start paying off.”

Over the past few months, as Fowler and swing coach John Tillery have tweaked his swing, there have been teases. A tie for eighth at the PGA Championship at the end of May. A tie for 11th at the Memorial at the start of June. Last week, at the Shriners Children’s Open, his first event after failing to miss the PGA Tour’s postseason, he missed the cut, but shot a second-round 66 and said it was “the right stuff.” Both that tournament and the CJ Cup are in Vegas, which is also the home to Fowler’s former swing coach, Butch Harmon, and in a quick visit, Fowler said Harmon told him “he loved everything that Tiller and I were working on.”

Then came a Thursday 66. And a Friday 66. And Fowler’s six shots behind leader Keith Mitchell, and one shot out of second entering the weekend.

“Right now, I feel like I’m in a position where this is probably — I told Butch over the weekend when I was hitting balls with him, when I worked with him, I probably wasn’t as knowledgeable about my swing, but it was simple and I understood what we were trying to do and I knew where we were at and I understood it,” Fowler said. “I feel like now I’m in a similar position, but I’m much more knowledgeable about the golf swing in general as well as mine, so that’s basically where we are.

“A lot of progress was made, especially over the kind of six, seven weeks that I had off prior to coming to Vegas.”

And now he’s two low rounds away from potentially his first win since the Waste Management Open at the start of February in 2019.

“I think downhill can happen pretty quickly,” Fowler said. “Obviously if you look at anyone’s career, everyone’s up and down, no one’s ever held it steady for, you know, a long period of time. Tiger’s probably been the most impressive with it as far as when he was good, he was good, and had his little times off. Even I think Jack is probably the one that doesn’t get talked about very much, he had his ups and downs.

“It’s there, it’s going to happen, it’s just — it’s not so much how you deal with when you’re playing well or bad, it’s just more so just kind of staying who you are and not letting it affect you as a person, keep kind of moving forward.”