How Viktor Hovland lent fellow pro his driver — and got it back in pieces. 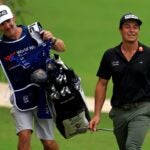 Viktor Hovland, ahead of this week’s World Wide Technology Championship at Mayakoba, was asked the biggest difference between Hovland of a year ago, when he won at El Camaleon Golf Club, and this year. “I’d say I’m a bit more seasoned,” he simply said.

“I’ve got a bit more experience, played a few more major championships, been part of a Ryder Cup,” Hovland continued. “I just feel like I have a better understanding of myself and my own game and just being kind of comfortable doing what I’m doing. Even though I haven’t maybe put myself in as many places to win tournaments since then as I maybe would have liked, I feel like I’m definitely handling the pressure in the moment a lot better.”

During Thursday’s first round, Hovland made five birdies and one bogey and shot a four-under 67, and he’s six shots behind leader Matthew Wolff. He missed just two of 14 fairways. And none with his driver, which is actually James Hahn’s.

Which brings us to Lee. On Wednesday, he and Hovland were next to each other on the El Camaleon range. From here, we’ll let handle-the-pressure-in-the-moment Hovland explain.

“I mean, he was just doing a speed session behind me, and we were just talking,” Hovland said Thursday. “He asked me if I could hit some on his quad and I hit some drives as hard as I could and then he went back to hitting his and like I was just kind of a — I was just curious; I wanted to see if he could get his ball speed up with my driver that was a little longer.

“Yeah, and then the rest is history.”

“Yeah, I don’t know where it snapped or how he snapped it, but I just look up after he hit the shot and it was in pieces,” Hovland said.

According to a story on the PGA Tour’s website, the break happened due to Lee’s recoil on his driver swing. But nearly as fast as it broke, Hahn gave him a near replacement to the Ping driver — Hahn’s is a bit shorter — Hovland hit with it, and it was in his bag on Thursday.

Pressure in the moment handled.

“James Hahn was in front, and he was nice enough to lend me one of his backups,” Hovland said. “It’s a little bit shorter, it’s a different shaft, but honestly, almost helped me this week because it’s a little shorter. It probably goes 10 yards shorter, but I just felt like I could really hit it a little lower and a little straighter.