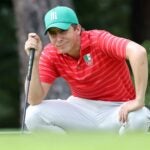 Carlos Ortiz is one off the lead through 36 holes of the Olympic golf event.

It’s easy to be cynical about golf in the Olympics. Some stars of the game play begrudgingly, others don’t come at all. The course is unmemorable. The format uninspired. But when you hear about the Olympic experience from a player like Carlos Ortiz of Mexico, it gets you thinking differently.

Ortiz, 30, played golf at the University of North Texas and now lives in Dallas. Last fall he won his first PGA Tour title, at the Houston Open. But he hails from Guadalajara, and is one of just three Mexicans to have won on Tour. In Tokyo, he is one of the minority of golfers who has elected to brave the 75-minute commute from downtown Tokyo to Kasumigaseki Country Club each morning in return for accommodation in the Olympic Village. A little extra travel time is a sacrifice Ortiz is more than willing to make.

“Just everything, the whole experience,” Ortiz said Friday when asked what was the coolest thing he’s done in the Village. “Being able to be surrounded by so many athletes, eating in, you go inside the dining halls and it’s like 20,000 people around you. It’s just the whole experience, being able to sleep in like these little condos, sharing the room with — I’m sharing with a boxer.”

That pugilist is Rogelio Romero Torres, a 26-year-old light heavyweight from Guanajuato, Mexico. A golfer and a boxer may seem like odd bedfellows, but that’s the beauty of the Olympics, at least to those participants who really embrace the Games: It’s a melting pot of athleticism and nationalism and exposure to new sports, cultures, languages, food, and, yes, roommates.

The other night Ortiz was in bed when Torres returned back to his room after a fight. This was at about 11 p.m. After taking licks in the ring, boxers don’t just turn in. Torres fixed himself an ice bath, which caused no small disturbance to Ortiz and his other apartment mates. “We come out and he’s like, ‘I’m so sorry, I’m still running on adrenaline. I’m just trying to calm down. Sorry if I wake you up,’ Ortiz recalled. “You wouldn’t get that anywhere else. It’s fun, I loved it so far.”

“You enter, it’s like a little bit of a table and three chairs and then there’s two bathrooms and four rooms. I’m staying with my caddie Mikey [Mike Kerr]. [Torres] is staying by himself and then two of his coaches in one room and another coach in another room.”

“I don’t think he has any idea about golf,” Ortiz said of Torres. “But he’s fighting about 10 p.m. tonight [Friday] so hopefully he wins and he doesn’t come home — you know, a little bit less excited than last time, so he doesn’t wake up everybody in the apartment.”

To which the Olympic golf moderator said, “You don’t want him to come home mad.”

That’s not all Ortiz has been loving. He also has been wowed by the Village’s food offerings.

“They have everything. Like when I say everything, it’s everything. Noodles, sushi, Mexican, pizza, burgers. I mean whatever, you name it, they have it. To be honest with you, for the amount of food they have to make, it’s great food.”

The good times and positive mojo for Ortiz have extended far beyond the Village cafes and dining rooms. After two rounds at Kasumigaseki, he’s in solo second, at 10 under, just one shot behind Xander Schaufelle. On Saturday, Ortiz will play in the final pairing, in prime position to bring home a medal for Mexico. “The tournament really starts probably tomorrow, that’s where you want to start making your run,” Ortiz said. “I feel like if I can hit a bit more fairways, I can be pretty aggressive.”

Ortiz was asked whether a medal from him or Torres would be more meaningful to his homeland.

“Honestly, I think they’re excited about any kind of medal,”he said. “That’s the beauty of these Games. I don’t think it matters what sport or how you look or what you’re doing, [what] matters is putting the flag up there and getting a medal for your country.”