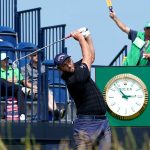 Jon Rahm practices at Royal St. George's ahead of the 2021 Open Championship.

The 2021 Open Championship finally begins on Thursday, July 15, at Royal St. George’s. You can find full first round tee times for the tournament at the bottom of this post.

Notable groupings for Open Championship Round 1

This week is the first time Jon Rahm will tee off in a major championship as a major champion. The World No. 2 finally captured his breakthrough win last month at the 2021 U.S. Open at Torrey Pines, where he birdied the final two holes in dramatic fashion to close out a narrow one-shot victory. Now Rahm is back on the major stage, ready to make more history and go for his second-straight major win.

He may be the betting favorite heading into the week, but Rahm will have to face the best players in the game, on a treacherous layout at Royal St. George’s, while dodging the wind and rain commonly found at the Open, no matter where its played.

Rahm will begin his tournament on Thursday at 4:58 a.m. ET alongside defending champion Shane Lowry and Louis Oosthuizen, who won the Open in 2010 and finished runner-up to Rahm at the U.S. Open a few weeks ago.

Check out complete first round tee times for the 2021 Open Championship below.

How to bet on the Open Championship — risk-free!