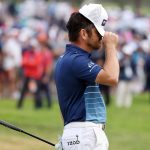 Louis Oosthuizen says he’d do it all again. He’d take that bold line on 17, shorten the par-4 and give himself an easy wedge and chance at a birdie, a birdie he needed to catch Jon Rahm on Sunday. A birdie (or par) on 17 that he never got.

Oosthuizen was the 54-hole co-leader of the 2021 U.S. Open, but after Rahm’s birdie-birdie finish he was tasked with making a birdie of his own coming in. After pars on Nos. 12-16, Oosthuizen stepped to the 434-yard par-5 17th one shot back. Lots of room right. Hardly any left. He went left.

Oosthuizen was forced to take a drop from the hazard, and even though he recovered well and hit the green to give himself a chance at a 4, he couldn’t get the 11-footer to fall and made bogey.

“I took the tee shot on at 17, and I knew it was a crucial hole for me to take it on and give myself a birdie opportunity,” he told reporters afterwards. “I didn’t pull it off, but standing on that tee again, I’ll probably do the same thing, taking a driver and taking the shot on.”

It was a critical error, especially since the par-5 18th had played as the easiest hole on the course all week, meaning a par-birdie finish would have been good enough for a playoff.

Now, Oosthuzien needed to eagle 18. He did that on Saturday and the hole had given up 13 eagles on the week, but he did himself no favors when his drive found the left rough, leaving a poor angle to a green guarded by a pond. So he made a decision to lay up. He failed to hole a wedge from 69 yards, rolled in his birdie putt and lost by one.

“I always thought 17 and 18 were going to be the two scoring holes on that back nine,” Oosthuizen said. “I did well to make a par on 13, and then another good par on 14. So just really getting through those stretch of holes. Seventeen was the key hole — drive that in the fairway, and I’ve got sand wedge into that pin, which would probably give me hopefully inside a 10-foot putt for birdie. Obviously, 18, you can lay up there and go for it, whatever decision you want to do. But I pulled it by five yards, that tee shot, and it was just — as I saw the line it was on, I knew it wasn’t going to bounce to the right. It was quite firm bouncing to the left there.”

“I feel like I had my shots [today]; I went for it, and that’s what you have to do to win majors,” he said. “Sometimes it goes your way, and other times it doesn’t.”