Bryson DeChambeau pulls back curtain on how celebrity, controversy affect him 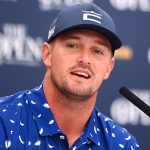 Bryson DeChambeau addresses the media at the Open Championship on Tuesday.

Bryson DeChambeau is stuck on a carousel and he can’t get off.

I have spent time in a large number of DeChambeau’s press conferences. I have not quite seen one like what he delivered on Tuesday at Royal St. George’s. My big-picture takeaway was this: Bryson DeChambeau would like everything to just stop for a second.

He’s in a beef with Brooks Koepka of which he wants no part. He’s had a public breakup with his caddie which he’d prefer stay private. He likes being one of golf’s more popular figures but has less interest in being one of the game’s most controversial. And when the scrutiny starts coming from all corners at once?

(Full disclosure: DeChambeau is GOLF’s playing editor, which means I have more exposure to him than some other golfers.)

Listen closely and you can hear DeChambeau trying to stamp down new mini-controversies as they arise. At the U.S. Open, some viewers criticized him for not yelling “Fore” when he launched a tee shot into the crowd at Torrey Pines’ fourth hole. On Tuesday, a reporter asked why he doesn’t shout to crowds.

“I do shout fore,” DeChambeau objected. “I don’t know what you’re talking about. There are plenty of people on the tee box that do shout fore. You’re bringing up a very controversial thing, which is unfortunate, but 99 percent of the time I do, and unfortunately people think I don’t. But that’s okay, they can say whatever they want.”

That’s a whole bunch of the Bryson Experience wrapped up in a one-paragraph response, isn’t it? He thinks some criticism lobbed his way is unfair. He very much wants to be liked. And journalism classes could dive all the way in on “you’re bringing up a very controversial thing, which is unfortunate.” He wants the issue in question to go away, but that can’t be done through pure desire. At the end of his answer, the issue is no further gone than at the beginning.

The very next question was about Koepka, who had just finished a presser of his own where he said he considered DeChambeau “fair game” for public criticism based on a DeChambeau jab on a Twitch stream a couple of years back.

“Maybe that’s on me,” DeChambeau said, although it’s clear he’s not exactly sure what reignited the pseudo-feud. “I really don’t know what happened, because we haven’t really bantered back and forth until now, so it’s like — why is that happening now?”

It did not sound like someone who wants said banter to continue. He was indifferent on the next question, too, about Koepka offering free beer to fans who taunt him on-course.

“I mean, I can’t do anything about that,” he said. “He can do whatever he wants.”

Then there’s the caddie bit. It’s still not exactly clear why Tim Tucker decided to step away mid-week at the Rocket Mortgage, but there’s no question the split affected DeChambeau. If you were the boss of a two-person company, and the other person suddenly left on the eve of a presentation, it would take some time and self-reflection before you could just get back to work.

“People think I’m this really hard-pressed person that demands everything out of everybody, and that’s not true,” DeChambeau said. That wasn’t specifically about his caddie, but it translated pretty well.

Let’s take a moment to acknowledge that DeChambeau walked onto this carousel, paid his fare and picked out his favorite pony. He has talked a big game and played a big game and has made it very clear how much bigger he’s trying to make his game. People see the way he handles frustration and don’t like it. They see his knack for getting in strange rules situations and don’t like that, either. Most of all, people seem turned off by the fact that he’s some version of different, which comes across as arrogant. He knows this.

Still, far more people like DeChambeau than dislike him. A trip to any professional event demonstrates that despite the “Brooksy”-yellers, he draws among the largest crowds, inspires fascination and admiration and enjoys his role as entertainer. But DeChambeau is a guy who reads and responds to Instagram comments. Have you ever read the comments and focused on the positive ones? Even tougher, have you ever tried to convince someone in a comment section?

The comment-section thing speaks to a larger truth, which is that DeChambeau is trying, and he wants you to know that. That’s the reason he makes YouTube videos. That’s the reason he played in The Match last week. Of course, more exposure means more chances to gain fans or rub people the wrong way. It doesn’t always work, and that’s frustrating. And when he screws up, he often doesn’t realize it until later.

“I think that sometimes people objectify us big players at the top of the game too much and they don’t realize that we are human and we make mistakes and things happen,” he said. That part is certainly true. This next bit is even more interesting.

“Look, I never grew up to become famous. I grew up to play golf, and that’s something that I don’t think people realize. It’s difficult to truly understand unless you’re in this environment, and sometimes you just try and make the best of situations, and they don’t necessarily look good or come out the right way.”

We can’t let DeChambeau completely off the hook for not wanting to be a celebrity; he has leaned in — and cashed in — on that exact premise. But it’s still possible to imagine that DeChambeau stepped onto a golf carousel and got taken for a celebrity ride.

“I’m somebody that doesn’t necessarily like controversy. I just like doing my own thing,” he said. “Do I like showcasing something unique and different? Yeah, but I guess what comes with that is controversy, and I guess that’s something that I don’t necessarily deal the best with sometimes.”

For someone who sometimes struggles with self-awareness, that’s pretty spot-on. DeChambeau likes to control variables. That’s the way he approaches golf. When he can’t control the variables, things go haywire. Links golf is basically all variables. It hasn’t always agreed with him.

“The times I’ve played in the British Opens in the past, I think they’ve been a little wet and windy. I usually struggle on that in general,” he said.

But now, play Whac-a-Mole as he might, there’s no stamping out everything around him. It’s out of his control. If Koepka says something about him, he’s back in the news cycle, whether or not he wants to respond. The more DeChambeau puts himself out there, the more people will respond to him, too. He can’t control what they’ll think. He can’t control what they’ll say.

This week, DeChambeau will tackle Royal St. George’s alongside the rest of the Open Championship field. He’s among the second tier of favorites, although he has a brand-new caddie and his tournament history isn’t strong; he owns two MCs and a T51 in three Open starts. Still, he’ll spend more time on the range than anyone else in the field and he’ll tee it up Thursday with every intention of winning, battling the elements and the setup and the randomness of links golf along the way.

He’ll continue to grapple with his own fame, too. He’s sure to get reminders from the British crowd. They read the tabloids, after all. And DeChambeau is blessed and cursed to be the most interesting type of public figure: The celebrity who only half wants to be one.