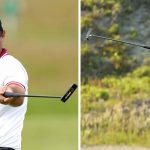 Patrick Reed and Cameron Smith have a history of fireworks.

It’s been a very long time since we last held an internationally significant golf tournament on international soil. With much of the 2020 golf season wiped out to the rearing head of the pandemic, golf fans weren’t treated to their typical international delights. The Open Championship was canceled and the European Tour schedule existed without the star-powered help it typically gets from mid-season PGA Tour entrants.

Yes, it’s been a while since the last significant event on international soil. In fact, if we were to go back and pick the last moment that captured the golf world’s attention prior to this week’s Open Championship, it might be the Presidents Cup. That event — held at Royal Melbourne in Australia — seemingly took place in a different era (in the faraway time of December 2019), complete with a vintage Tiger Woods performance, an all-time American comeback, and some decidedly un-Presidential drama. And on Tuesday at the Open Championship, that drama resurfaced in a meaningful way.

But first, back to Melbourne in 2019, where no player on either side was more involved in the drama than Patrick Reed. Throughout the week, Reed drew the ire of both International team players and fans for the previous month’s sand-altering fiasco at the Hero World Challenge. At one point, Reed made a mock shovel gesture after draining a long putt. At another, fans were ejected from the crowd for hurling insults in his direction. At another, Reed’s caddie, Kessler Karain, got into a physical altercation with a group of fans and was subsequently banned from the tournament.

On the other side of the debate was Cameron Smith. Smith, at the time an ascending star for the International side and hometown favorite in his native Australia, stirred controversy with a series of heated comments in Reed’s direction.

“If you make a mistake maybe once, you could maybe understand but to give a bit of a bulls— response like the camera angle … that’s pretty up there (inexcusable),” Smith said at the time. “I don’t have any sympathy for anyone that cheats. I hope the crowd absolutely gives it to not only him, but everyone (on the American team) next week. I know Pat pretty good and he’s always been nice to me, so I don’t want to say anything bad about him. But anyone’s cheating the rules, I’m not up for that.”

So, why are we re-airing the pair’s dirty laundry ahead of a golf tournament being held a long way from Smith’s native Australia and Reed’s native Texas — the Open Championship? Well, because the two players were just grouped together.

While it’s unlikely we see any fireworks between the two, it’s perhaps likely the pair won’t be sharing dinner after their round. As for the rest of us? Well, that’s just one more thing to watch when the Open Championship returns for the first time in two years come early Thursday morning.